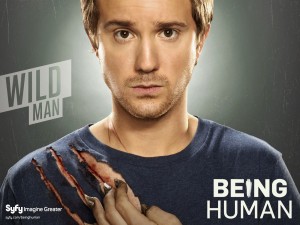 Sam Huntington co-stars in Syfy’s hit show “Being Human”, which returns this month for it’s third season.  He plays the character of Josh and is a werewolf that lives with a vampire (Sam Witwer) and a ghost (Meghan Rath). We spoke with Sam back in the very beginning of the show for season one, check it out here.  We got a chance to catch up with Sam again and got the scoop on the second season and what we can expect for the third.

Mike Gencarelli: Tell us about what you enjoyed most about playing Josh in season two?
Sam Huntington: I think for all the characters, it was great to see them go down their darker paths. As hard as Josh tries to do the right thing, sometimes that need to do the right thing forces him to do the wrong thing. So that was really interesting for me to see and play that aspect of him. As hard as he tries he just has these horrible flaws right down to the end of the season. So that was pretty cool. I also really enjoy the humor of the show.

MG: Each character seemed to go off on their own story in the second season, can you reflect on that for us?
SH: Josh is at his best when he is with Nora and with his roommates. Those are always my favorite moments. I think looking back I would have liked to be with those people more. I think in season three we are going to be put together a lot more so it will be pretty great.

MG: Do you feel that you have an creative freedom with the character now? 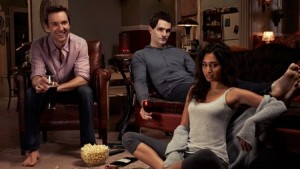 SH: I feel that I know Josh so intimately at this point. You are given these beautiful words to say, which sculpts the role. But then of course he takes on a life of his own now that I have been doing it for two years and going into a third. Put it this way, I think I know how Josh will react in every situation, which is super cool for me. I would say 99% of the time, the writers will nail it for his but there is that 1% when I have to chat it over and get on the same page. A lot of times they have reasons why I have to act in a certain way or do a certain thing. It is definitely a collaboration in that regard. We rarely have to intervene though, which is great.

MG: You parted ways with Nora and the surprise with Julia, no luck for you in woman department huh?
No he doesn’t. Word to wise for all those ladies out there who is curious about Josh the Werewolf…Don’t Do it! It’s a death wish. [laughs]. It’s just a bad situation. He is a wet blanket on relationships, trust me.

MG: How would you compare the two seasons production wise?
SH: I would say that season two was 100% more easier than season one. We ironed out a lot of kinks with everything…the make-up and the hours. The writers have figured out what works and what doesn’t. It is always process. You have to figure out what you are capable of doing. You want to always go right up to the limit but you obviously don’t want to kill everyone [laughs]. Season one nearly killed me. Season two was way smoother. I am hoping that season three is more of the same. 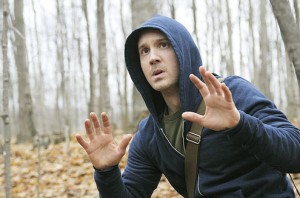 MG: During the first season when we spoke, I mentioned that I felt Josh bared most of the burden but in the second season it is more equally distributed.
SH: I think so. They were able to streamline a lot of the werewolf stuff  Beyond that also as far as the character goes but poor Josh just keeps getting hit and beaten down to the ground with the things he is dealing with. I feel so bad for the guy. He can’t win [laughs].

MG: Season two ended on cliffhanger, tell us what we can expect for this next season?
SH: When we finished the season we had no idea what was going to happen. We know now obviously since we’ve gotten the scripts. It is a great cliffhanger  What is the funny thing is that I don’t know if the writers knew [laughs]. I am sure they had a couple of ideas. At the end of the season everything kind of had their hands in the cookie jar, as far as what they wanted to see happen. They really want the show to be the best that it can be. The good news is though, now knowing where we go it is going to be SO awesome! It is such a great direction. I couldn’t be happier!