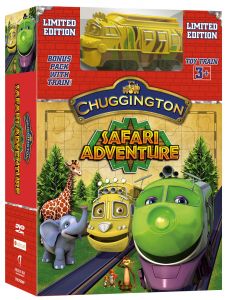 All aboard! The gang of Chuggington is at it again and taking preschoolers from coast-to-coast in their latest release “Safari Adventures”.  My eight month old daughter really digs this show, especially the theme song.  I love that fact that it is filled with valuable life lessons for her to enjoy as she grows up. This all-new compilation is being released just in time for Valentine’s Day! It comes in two different versions: the standard DVD and also a limited edition release that features a collectible Mtambo toy engine from TOMYTM.  If you are a fan of this show then this release is a no-brainer for sure! CHUGGINGTON!!

Official Premise: Honk Your Horns For The Ultimate Safari Adventure! In these six episodes — plus a bonus Badge Quest episode — Koko helps out a pack of playful squirrels, Brewster investigates banana thieves at the Safari Park, and Wilson hauls a mischievous elephant to its new home. There’s monkey business with Zephie, a royal visitor for Mtambo and jungle camouflage, too. With good friends and helpful adults like Puffer Pete, Eddie and Dunbar, your own little trainees will learn all about problem solving, working together and being patient with the animals, in this collection of fun-filled Safari adventures.

The special features are decent and fun for the kiddies. There is a bonus Badge Quest episode titled “Animal Helper”.  There are also two featurettes called “The Chugger Spotlight”, one called Koko and the other Mtambo (aka the toy car that comes with the DVD). Both very cute. Lastly there are various coloring and activity sheets to print for kids via the your DVD-ROM drive. Props have to go to Disney though cause without them I wouldn’t have found out about this show. The air it weekdays on Disney Channel’s Disney Junior programming block but more importantly daily on their new 24-hour Disney Junior cable.  The series is currently in its third season and I hope to see much more of these DVD’s released in the future.