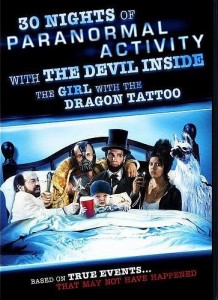 When it comes to parody spoof films, it is usually hit or miss (mostly miss).  With a title like “30 Nights of Paranormal Activity with the Devil Inside the Girl With the Dragon Tattoo” how can they go wrong! I have to admit this one delivers. Nothing is safe here! Besides the film’s in the very long title, many other non-horror including “The Dark Knight Rises”, “The Hunger Games”, “The Artist” and “Black Swan” are ranked on, even TV shows like “The Bachelor”, “The Apprentice” and “Ghost Hunters”. The primary spoof is “Paranormal Activity” and with all the found footage films taken over Hollywood it is nice to see some fun poked at them. Not every joke is a score but there is enough here to make it worth a least one viewing.

Offical Premise: Scream with laughter in this found footage parody- Dana’s father was sent to a psychiatric hospital after he killed the entire cast of The Artist while an exorcism was being performed on him. She continues on with her life -gets married, has kids and moves into the same (haunted) house she grew up in. But now she must battle the demons which haunted her father before her.

Kathryn Fiore is hilarious and steals the show (Here is our interview with her from earlier this year). Writer/director Craig Moss knows how to work parodies and film’s with long titles after their last “The 41-Year-Old Virgin Who Knocked Up Sarah Marshall and Felt Superbad About It”. The only special features included on the DVD is “Behind the Scenes of 30 Nights of Paranormal Activity with the Devil Inside the Girl with the Dragon Tattoo”, but it is a nice showcase on the production.  I would have loved to seen a gag reel included.  This film is not perfect but it is worth it for a few good laughs.  If you want more parodies, keep an eye out for “A Haunted House” and “Scary Movie 5” both coming this year.