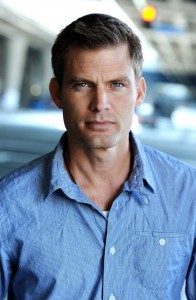 Casper Van Dien is known best for his role of Johnny Rico in “Starship Troopers”.  He recently steals the show in the new gaming film “Noobz”, where he plays a comedic version of himself.  Great movie, check it out! He also takes over the role of Johnny Cage in season two of “Mortal Kombat Legacy”. Media Mikes had a chance to chat with Casper on these roles and what we can expect.

Mike Gencarelli: Tell us how you got involved playing yourself in “Noobz”?
Casper Van Dien: I met Blake (Freeman) a couple years before and we hit it off. He told me he wanted to right me into one of his movies. So one day he calls me up and asked me to do a cameo in this gaming movie he was making. He told me he wanted me to just play myself. So I read it and I thought this is a friend of mine and this is what he thinks about me [laughs]. See the movie to understand why. I really think I need to get therapy and look into it if this is the way my friend sees me as. [laughs]. But I agreed and it was really fun.

MG: It’s not always easy play yourself [laughs].
CVD: I had to go to my acting coach cause I was afraid they might recast me [laughs]. I was warned several times but I guess my performance was good enough since they kept me on.  So I guess I lucked out.

MG: Are you a gamer yourself?
CVD: I think I used to consider myself a gamer until I met Blake and his friends. When I go over to hang out and talk shop, Blake and all his friends/business people are all playing online video game tournaments. We will do the meetings while they are playing. So I realized there is a difference between gamers and people that play video games. I also got to meet some of the really serious gamers that we had on “Noobz” with us that actually get paid for this. Robert Paz was in it and he became a friend of mine too. Those guys really know how to play video games and it is a art form to them. But overall, I have always loved video games and have since I was a little kid.

MG: Do you plan on working with Blake again? 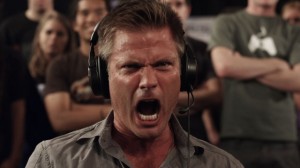 CVD: I also just did another movie with him called “Mucho Dinero”. It stars Blake, Eddie Griffin and myself. That one he wanted me to play someone completely different than in “Noobz”. Funny story though, one of the grips came up to me during filming and he said “You ruined ‘Starship Troops’ for me, I’ll never be able to watch it again” and walked away. I am not doing to give details, you have to see it to find out why. I don’t know man, I am either doing something really right or I am really screwing up [laughs]. I am thrilled to be working with Blake again. He is a good pal and I love his awful sense of humor about me and life in general.

MG: Tell us about playing such an iconic character like Johnny Cage in “Mortal Kombat: Legacy”?
CVD: Yep, I just got to Johnny Cage in Kevin Tancharoen’s web series. There are several episodes this year that he is in. I think that Matt Mullins did a great job in the first season. I think he softened it up for me to do more as well. I don’t know what they are trying to say though, since Johnny Cage is a D-list actor, has a bit of an attiude and is a little conceded. So I am not sure why they wanted me and told me that I was perfect for it [laughs]. I had a blast doing this though. There are a lot of incredible marital artists. I fight a lot but nothing like these guys. Another thing is that my character gets into a girl fight. Johnny Cage in a girl fight. You have to see it man, it is very cool!

MG: Any plans you will be involved with the upcoming feature film also?
CVD: You know I would love to be involved. It is up to the director. If he wants me then I would love to do it. If he wants to do something else, either way I will fully support it. I appreciate him wanting me in the web-series in the first place. I had a blast. So we will see what will happen. 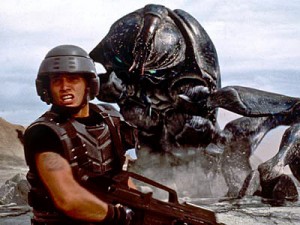 MG: It’s been over 15 years since “Starship Troopers”; yet the series is still very alive with “Starship Troopers: Invasion”, which your executive produced. Why do you think this franchise resonates with fans?
CVD: I get more tweets every day with quotes from that film on my Twitter page. I get dozens every day and then when it airs I get hundreds a day. It is just unbelievable how much fans love this movie. It is awesome to have been involved with a film that people quote you from. The film just has some many awesome quotes. Ed Neumeier is an incredible writer. Paul Verhoeven is an amazing director. This film has just had such an amazing life and so many fans.

MG: I love how active you are on Twitter and interacting with your fans.
CVD: Yeah, I love it. I wasn’t announcing that I was playing Johnny Cage because I was asked not to. But one day I went on Twitter and someone wrote “Fucking Johnny Rico is Fucking Johnny Cage. Fucking Awesome”. It was one of the coolest tweets I got last year. I was super excited by that and that is how I found that Warner Bros had released the news.

MG: What else do you have planned for 2013?
CVD: Well like I said I got the movie “Mucho Dinero”. It was a fun film to shoot and it is really funny as well. Blake wrote, produced and directed this one as well. I am going to shoot a film this weekend in Oklahoma, which is another action/thriller. I shot a Hallmark Christmas movie last year that that did really well called “Baby’s First Christmas”, so that was really cool. I have been doing this for 25 years and it just keeps getting better and better!