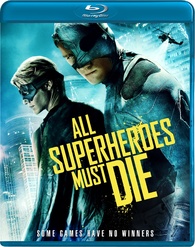 Writer/director Jason Trost is a name that has come up twice now in the last year. He is part of the duo responsible for last years cult hit “The FP”, which I also really enjoyed. “All Superheroes Must Die” is a real treat with all the focus on superheroes thanks to “Marvel’s The Avengers”. I like the idea of focusing on a game where superheroes actually lose. Jason Trost stars as well along with Lucas Till (“X-Men: First Class”) and deliver a fun and very clever look at the genre. This is much more than just a superhero movie, it is a great character piece as well.

Official Premise: “All Superheroes Must Die” follows four masked avengers – Charge (Trost), Cutthroat (Till), The Wall (Valmassy) and Shadow (Merkley) — who find themselves stripped of their powers by their arch-nemesis (Remar), whom they defeated years earlier. Or so they thought. When the sinister mastermind puts the heroes through a series of brutal challenges that are virtually impossible to overcome, they must battle the clock, and even each other, in a race to stop a deadly countdown that could mean total destruction. Will the superheroes prevail, or will they be forced to meet their demise as mere human beings?

The film carries a budget of under $1 million dollars but looks quite impressive. The scale is small but feels a lot larger than it is. The 1080p transfer on the Blu-ray is very impressive, especially since the film is very dark. The accompany the impressive video is also a sweet audio packing a nice DTS HD Master Audio 5.1 track. After enjoying this film, I would wanted to run right to the special features and check them out. Unfortunately there are none – no commentaries, no featurettes. A little bit disappointing.