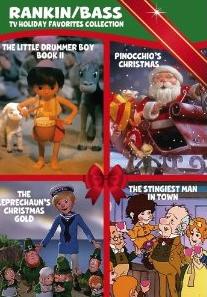 When it comes to Rankin/Bass, they are the Christmas special gods! I always think about their specials when the holiday season comes around. This TV Holiday Favorite Collections includes some of the lesser popular titles like “The Little Drummer Boy: Book II”, “Pinocchio’s Christmas”, “The Leprechaun’s Christmas Gold” and “The Stingiest Man in Town” (which is the only one not using stop-motion “animagic”). I watch these specials every year on ABC Family. They are not the best of the best but they are still Rankin/Bass and they are classics.

Official Premise: Four family classics from the studio that helped make the holidays magic!: The Little Drummer Boy Book II: Starting where the original left off, Book II sends Aaron, the little drummer boy, off on a quest to aid Simeon, crafter of the silver bells. With Greer Garson and Zero Mostel. The Stingiest Man in Town: Rankin/Bass departs from its usual stop-motion “Animagic” process for this line animation adaptation of Dicken’s A Christmas Carol. With Walter Matthau, and Tom Bosley. Pinocchio’s Christmas: After Fox tricks him out of a gift for Geppetto, Pinocchio sets out on an adventure to reclaim Christmas. Along the way he meets up with a beautiful marionette and a jolly old man in a flying sleigh. With Alan King. The Leprechaun’s Christmas Gold: A sailor and a leprechaun join forces to reclaim the Christmas gold after a wailing banshee makes off with it, thanks to the sailor’s blunder. With Art Carney and Peggy Cass.

If I am not mistaken, this release is the first time that “The Little Drummer Boy: Book II” has been released on DVD, so that is the main draw here. The other specials have been previously released before on DVD, but it is nice to have them in the spotlight for once. The specials look nice on DVD but like some Warner Archive releases have not been remastered but taken from the best quality master that is currently available. So they could use a little touching up but for me that has always been the charm of these films, which is their imperfections. I look forward to sharing these episodes with my daughter and revisiting these each year.