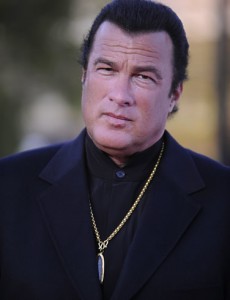 Steven Seagal is an action movie superstar, martial artist, musician and even deputy police officer. He is teaming with with Steven Austin in his new film “Maximum Conviction”.   Media Mikes had a chance to ask Steven a few quick questions about the new film, as well as law enforcement, his music and the rumors of “The Expendables 3”.

Mike Gencarelli: How did you end up teaming with Steve Austin for “Maximum Conviction”?
Steven Seagal: My team offered it to me and I liked the story. So I decided to try it. I loved working with Steve and it would be my pleasure to do it again if the opportunity arose. He is a gentleman and a great guy.

MG: What do you think it takes to make an effective action film today and how it has changed since films like “Above the Law”?
SS: Nowadays they have millions of dollars, special effects and wires. The old style you don’t see very much anymore. It is all special photography, special effects and stuff like that.

MG: You’ve taken on the role of producer and writing on most of your projects, tell about how you ended up producing this film?
SS: I produce almost everything that I do. On this project, Steve got in on it with executive producing and that was cool with me. 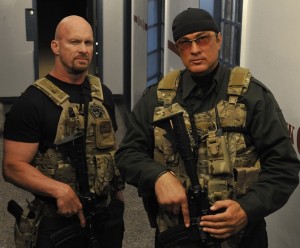 MG: Loved your role in “Machete”;  tell us about your reuniting with Danny Trejo in “Forces of Execution”?
SS: Danny has been a friend of mine for 25 years. I love the guy. He is my brother and I love to work with him on whatever we can.

MG: Now that season two has completed for Reelz Channel’s “True Justice”, is there a third planned?
SS: There is no word yet but we are just waiting to see what is going to happen. So, I am waiting just like you.

MG: What ever happened to season three of “Steven Seagal: Lawman”?
SS: Well what happened is that A&E got paranoid since the Obama administration was suing a party close to the show. So in their great courage, they put everything on hold.

MG: What is the most important skill do you think that all law enforcement officers need?
SS: That is like asking what is the best gun for all purposes. You need a different gun for different situations. In terms of a police officer in general, one of the most important things is to have great people skills and understand who you are talking to. Trying to make the community understand that we are their brothers and we 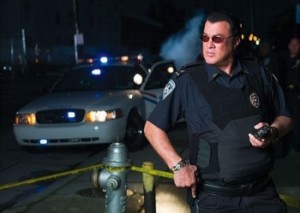 are there to protect them. Conversely  there are other elements for super consciousness when it comes to going into any situation that can be potentially dangerous. Also how you can have a panoramic awareness that is also extremely important.

MG: Can you address any rumors of you joining the planned “The Expendables 3”?
SS: I will not be involved with that project.