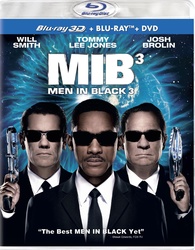 “Men in Black” is a fun series.  The first film was very unique in its time.  The second was a bit messy but still tons of fun.  The third film takes the series into a nice direction.  I am not sure if there will be a fourth film but it is much welcomed.   The film seems a little over-budgeted to me but is a hell of a ride and very entertaining.  The 3D on the Blu-ray is good but not stunning.  You can tell that this was converted into 3D for the money. There is a nice about a depth added due to the added third-dimension, there is just no WOW factor from it. The film still works though with or without it though. Josh Brolin is a nice addition to the cast and gives a spot on performances for K (aka Tommy Lee Jones).  I also think this film has real replay value and I look forward to watching it again soon (which is rare with most films I watch).

Official Premise: In “Men in Black 3”, Agents J [Will Smith] and K [Tommy Lee Jones] are back… in time. Agent J has seen some inexplicable things in his 15 years with the Men in Black, but nothing, not even aliens, perplexes him as much as his wry, reticent partner. But when Agent K’s life and the fate of the planet are put at stake, Agent J will have to travel back in time to put things right. J discovers that there are secrets to the universe that Agent K never told him – secrets that will reveal themselves as he teams up with the young Agent K [Josh Brolin] to save his partner, the agency and the future of humankind.

Sony Home Entertainment’s release comes in a three-disc combo pack. There is a Blu-ray 3D, Blu-ray and a DVD included, as well as a Ultraviolet Digital Copy. The 1080p transfer is sharp and impressive, whether you are watching in 3D or 2D. I still will most likely revisit this again in 3D, even though it wasn’t perfect. I liked the depth given to the film and I thin kit is worth it just for that. The real star of this release though is the DTS-HD Master Audio 5.1 surround audio track. It works perfectly with the film’s action and Elfman’s score. My surround sound really needed a nap after this extreme workout.

“Men in Black 3” also marks the debut use of “The Movie Touch”, which is an interactive bonus for those with an iPad. It goes well beyond the concept of a second-screen app. It allows you to watch the movie on their iPad while also navigating numerous bonus behind-the-scenes videos, photos, fun facts, soundtrack music info, multi-angle explorations, an interactive timeline, actor profiles, exclusive content and more. The Movie Touch App is available free from the App Store, here. This is going to be a very cool feature with possibilities going forward with future titles like “Total Recall” and I look forward to see what’s next.

Sony has been really embracing the Blu-ray 3D format. They actually include some 3D special features again after “The Amazing Spider-Man”. They are not show-stopper but still 3D extra nonetheless. “The Case of Boris the Animal: The 3D Models of MIB 3” is an interactive feature that allows you to interact with a 3D display and may learn more the film’s goodies like the Particle Randomizer, the Class 2 Jet Pack, the Archanan Time Jumper, Boris’ Motorcycle, and the Monocycles. There is also a ever-to-short look with Visual Effects Supervisor Corey Turner on “Converting to 3D”. I wish this was much longer but still cool. Lastly there is a 3D trailer for “The Amazing Spider-Man”.

The rest of the special features are on the 2D Blu-ray disc. “Spot the Alien Game” is a cute but not amazing FPS using your remote. Kids might enjoy this more than adults. “Partners in Time: The Making of MIB 3” is a decent length behind-the-scenes feature with cast and crew chatting about everything from production to visual effects. “The Evolution of Cool: MIB 1960’s vs. Today” is nice feature on bringing the series back and its travels through time. “Keeping it Surreal: The Visual FX of MIB 3” focuses solely on the film’s special effects and creature designs. “Scene Investigations” is a detailed focus on specific scenes, including Lunar Prison Escape, Showdown at Mr. Wu’s, J’s Time Jump, and The Motorcycle Chase. Animation Supervisor Spencer Cook and VFX Supervisors Ken Ralston and Jay Redd takes us through “Progression Reels” with a commentary voice over on the design and digital effects. Lastly, there is a very funny gag reel and music video for “Back in Time” by Pitbull included.