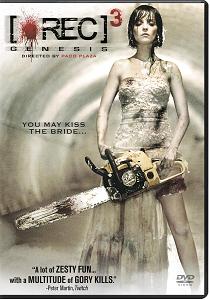 I was a huge fan of [REC], before the crappy US remake and sequel. I thought the idea of the film was so scary and very ballsy. [REC] 2, I was not that big of a fan of. I thought it was too much of a tag-along to the first film. “[REC]3: Genesis” is believe it or not, one of my favorite films of 2012, so far. It is such an improvement over the last film and the franchise. The film is a nice plenty of horror and comedy and comes packed with some amazing gore and kill scenes.  The film also takes a different approach from the whole hand-held shakey aspect, which I really dug.  But most importantly, Leticia Dolera looks beyond hot as a vengeful bride with a chainsaw.  I mean come-on that is a no-brainer!! She needs to be in every movie that I see!

Official Premise: Koldo and Clara are about to celebrate the most important day of their lives: their wedding. Everything appears to be running smoothly, and the bride and groom and their families are enjoying a wonderful day-that is, until some of the guests start showing signs of a strange illness. Before they know what’s happening, the bride and groom find themselves in the middle of a hellish ordeal as an uncontrollable torrent of violence is unleashed on the wedding. Amidst the chaos Koldo and Clara become separated and begin a desperate search for one another. What started off as an idyllic day quickly descends into a nightmare of the worst kind

I am very disappointed in this series, Sony is to blame this time, for not releasing this on Blu-ray.  I am not sure what the hell is going through their minds, since the series is available on Blu-ray everywhere but the US. To top it off, the special features are lacking a bit overall.  There are 12 deleted scenes included, some are pretty good and could have been put into the film…others are a big no.  Lastly there is a blooper reel included, which is definitely worth checking out.  But that is it, I was hoping for a little more.  Maybe the foreign market’s Blu-ray release will have some more goodies.  Heading to eBay now… Thank God this movie is completely awesome! This is a must for all horror fans!