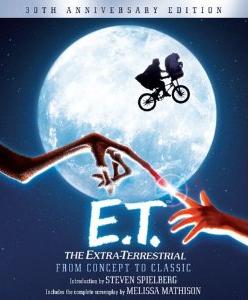 This 30th Anniversary Edition included the illustrated story of the film and the filmmakers. As I turn 30 myself this year, it is crazy to believe that this film that I grew up on is doing the same.  “E.T.” is one of Steven Spielberg’s most personal stories to date. This film was also the reason why John Carpenter’s “The Thing” flopped the same year since everyone wants to see aliens in a good light not evil.  This new addition is the only official book on the making of the film and includes an all new introduction from Steven Speilberg.

This book is also illustrated with more than 200 photos and drawings, which look amazing. I really would have loved this book to have been hardcover. It the illustrations aren’t eough this book includes the complete annotated screenplay by Melissa Mathison.  But that is not all either, there are reflections from many of the cast and crew, including designer Carlo Rambaldi and producer Kathleen Kennedy. Kennedy chats about the impact of the movie on today’s audience.  There is also a bunch of amazing little known facts and trivia revealed in this book about the film’s production.

I never knew that “E.T.” was a plant…that’s right kiddies, not male or female…a plant.  It is also told that “E.T.” had only 49 lines of speaking. This film is 30 years old and still very relevant today and still holds up. Since this book is timed to match with the Blu-ray release, the October is going to be the month of “E.T.” and having everyone “phone home” and revisit this classic film.  And what better want to accompany the amazing movie, than with this amazing book.  This is a no-brainer for Spielberg fans…unless you have the 20th Anniversary release,  since there is not much new in this edition.