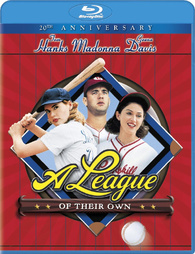 First, let me admit that I am not a big fan of sports films at all.  But there is something about “A League of Their Own” that stands out among the rest. The cast is so phenomenal and their performances are some emotional…and funny as well.  This film has a great blend of comedy and drama. This year “A League of Their Own” is celebrating it’s 20th Anniversary and Sony is given this film a nice treatment on Blu-ray. They also timed it just right releasing just one week before the 2012 World Series of Baseball.  If you are looking for a chance to revisit this film in HD, just a reminder though “There is no crying in baseball”.

Synopsis: Tom Hanks, Geena Davis and Madonna star in this major league comedy from the team that brought you Big and City Slickers. Hanks stars as Jimmy Dugan, a washed-up ballplayer whose big league days are over. Hired to coach in the All-American Girls Baseball League of 1943  while the male pros are at war  Dugan finds himself drawn back into the game by the hearts and heroics of his all-girl team. Teammates Madonna, Lori Petty and Rosie ODonnell round out this all-star roster, with Jon Lovitz adding a scene-stealing cameo

Sony delivered a home run with its Blu-ray presentation.  The video looks sharp and very clear with its 1080p transfer and in its 2.39:1 original aspect ratio.  The film doesn’t look 20 years old as well,  still hard to believe it has been that long.  The DTS-HD Master Audio track sounds amazing as well with the sports scenes and dialogue.  The special features included are impressive as well.  There is a fun commentary with Penny Marshall, Lori Petty, Megan Cavanagh, and Tracy Reiner.  There are fifteen deleted scenes with optional video introductions with Director Penny Marshall. There is an exclusive documentary called “Nine Memorable Innings”, which  features interviews with the cast and filmmakers. Lastly, there is the music video for Madonna’s “This Used to Be My Playground” (still have the single cassette).