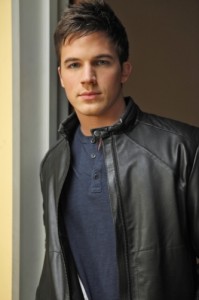 Matt Lanter is currently the voice of Anakin Skywalker in “Star Wars: The Clone Wars”. The show is entering its fifth season starting on September 29, 2012. He also co-stars as Liam on The CW’s “90210”. Media Mikes had a chance to meet up with Matt during the recent Star Wars Celebration VI and got to chat “Star Wars” with him.

Mike Gencarelli: When you are preparing to voice Anakin, what do you use as your inspiration to get into character?
Matt Lanter: Well we’ve been doing it for seven years now. We have been living with the character for a lot of time. So there is no ritual that I do to actually get into character. When I read the script, I just let my imagination take off into that world. The movies and the prior episodes are always in my head. When we go to record an episode, Dave (Filoni) is also there to give me notes. With Anakin, we always have an on-going discussing of where is he at right now. Has he changed as far as his awareness to manipulation. Is he losing patience for Obi-Wan or the counsel? Also how much do we want to show of them each season? There is a lot of that kind of prep prior to recording.

MG: Any new characters that you will be voicing this season?
ML: In the premiere episode this season, I get to also voice Hondo’s right hand man, a pirate called Jiro. He actually has a substantial role in the episode. He speaks with this Australian accent. I also have done a bunch of other stuff but you probably can’t tell since I really try to change it up. You just know Anakin’s voice so well. Dave is really letting me get in there and do more and more, which I love. It is great to be one of the James Arnold Taylor’s or Dee Bradley Baker’s on the show.

MG: Did you realize you had such range when voicing other characters?
ML: I think I learned more with going to different places and being around these guys. They talk about being elevate due to the acting part of it. But I am really elevated by them with the range of voicing that they can do. Like how to place with a pitch or tone for a voice, I have really learned a lot from them. I think if you look back through the series, I think you will be surprised that I have played numerous characters throughout. Bounty Hunters, Pirates and all sorts of cool things.

MG: You said you’ve watched the Star Wars Saga, Have you ever met Hayden Christiansen?
ML: No I have never met Hayden, no. He is about the only one I have met.

MG: Do you have a favorite character and can’t say Anakin?
ML: [Laughs] I love Han Solo. He is the man. He get’s the girl. He is witty. Han Solo has a big influence voicing Anakin for me. So I’ll go with Han Solo…and R2-D2.

MG: Do you feel that as Anakin gets closer to his role in “Revenge of the Sith” that it is becoming more challenging for you?
ML: Yeah, it will be a challenge. It is always a challenge though, but a fun challenge to accept to take him to that place. What is going to be challenging is how to show that in a natural way and not just go all the way out. we need to find the moments to show that stuff. Cause even in “Revenge of the Sith”, he is not a monster or anything. So we have to naturally segue that in. But with Dave and the great writing team with have, they have it under control.

MG: With fellow “Clone Wars”, Catherine Taber, Dee Bradley Baker and Anthony Daniels having voice roles in “Star Wars: Detours”, any chance you’ll appear as well?
ML: I would love to. I saw some of the stuff from the trailer and it looks like they are really having a blast with it. I am not sure what they would use me for but I would definitely love to.

MG: Do you own any of your own merchandise?
ML: Yeah, I do actually. I own a bit of Anakin stuff. I try not to get crazy with it. I got some really cool figurines form Gentle Giant. After a few seasons with the show, they gave us all a “Clone Wars” head thanking us for three years of service. That was really cool, especially since that was a cast/crew only thing.

MG: How is it for you going from such an intense role in “Star Wars The Clone Wars” to “90210”?
ML: Like I said, I have been doing both for a while now. It is just a different head space, when I am driving to work to “Clone Wars”, I am usually thinking about something that happened on a previous episode or a cool image or just being in a “Star Wars” state-of-mind. With “90210”, I have a long drive to that show. So I have a lot of time to think about that show and my character.

MG: If Liam from “90210” and Anakin from “Star Wars: The Clone Wars” met, what would they talk about?
ML: [laughs] Probably about fixing a car or a speed-bike. Cause that is Anakin and Liam in the first season was all about his car. So I think they would find some common ground there [laughs].