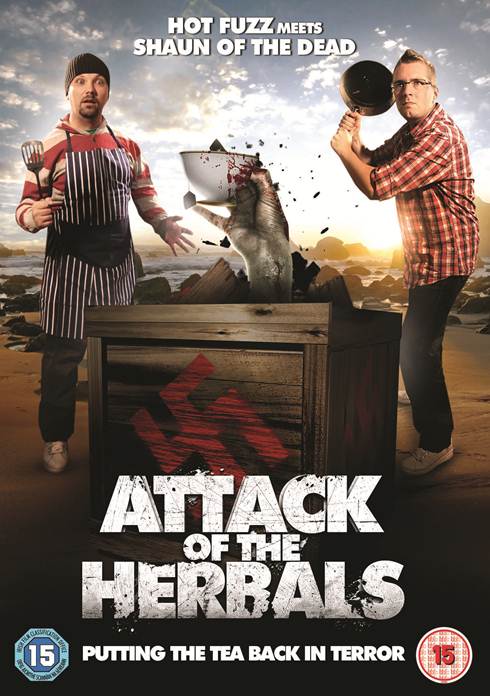 STICK THE KETTLE ON TO BOIL. DUNK HERBAL TEA BAG. ADD TWO LUMPS OF ZOMBIE. A SPLASH OF NAZI… AND WHAT DO YOU GET??

To celebrate the release of David Ryan Keith’s home-grown Scottish comedy-horror, ATTACK OF THE HERBALS, Media Mikes would like to giveaway TWO DVDs for this film.  If you would like to win one of these great prizes, please leave us a comment below or send us an email and let us know your favorite zombie film. This giveaway will be open until Friday July 6th at Noon, Eastern Time and is open to anyone who wants to enter!! Only one entry per person, per household; all other entries will be considered invalid. Once the giveaway ends, Media Mikes will randomly pick out winners and alert the winners via email.

Nazis in gasmasks, a foul-mouthed kilt-wearing land-baron, zimmer-frame wielding flesh eating pensioners… what’s not to love?? Scottish comedy-horror ATTACK OF THE HERBALS is strangely charming and never takes itself too seriously!

Jackson McGregor has returned after years of exile to his grandparent’s home in a small sleepy Scottish village, a village where the daily routine consists of eating, sleeping, fishing and drinking tea. However the local’s way of life is under threat from a large corporate retail machine headed up by a monster named Bennett who wants to buy land for a new development.

After discovering a crate of herbal tea washed up on shore, Jackson hatches a plan to sell the tea and save the village. However the new lease of life the tea seems to give people soon turns into a nightmare, and Jackson finds himself in a village of Zimmer-frame wielding, flesh eating pensioners.

Can Jackson save the village, redeem himself and stay alive? Attack of the Herbals puts the Tea back into terror, an outrageously funny horror comedy that is quite simply Scotland’s answer to Shaun of the Dead….
ARRIVING ON UK DVD & VOD ON 25TH JUNE 2012