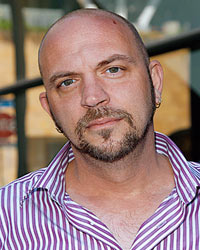 Fred Andrews is the writer/director of the horror film “Creature” which stars Sid Haig, Mehcad Brooks and Serinda Swan. Media Mikes had a chance to talk with Fred recently about the upcoming DVD release of the film.

Adam Lawton: What can you tell us about the upcoming DVD release of “Creature”?
Fred Andrews: Right now I don’t know a lot about the specifics of the release.  The intention has always been to release it on Blu-Ray and DVD but I don’t know what the distributor’s plans are. I am pretty excited about it being released in these formats as it will allow a lot more people to be able to see the film and enjoy it.

AL: Did you find it hard both writing and directing the film?
FA: This was a story that had been with me in many different forms since the early 2000’s. The hardest part was probably going through the revision process with the producers when we were still in the scripting phase. There was quite a bit of back story and some other situations that we had to work on. As far as being on set we never had to wait if we wanted to re-write some lines so that was pretty convenient.

AL: What was the casting process like?
FA: Having a very young and attractive cast was something that I wanted to do from the 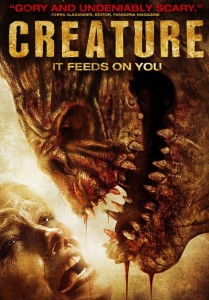 beginning. I had a fantastic casting director by the name of Kelly Wagner who brought in a lot of great people. The people she brought in all had great energy and experience. Having Amanda Fuller, Serinda Swan and Mehcad Brooks was just great. Aaron Hill was another person that was really great to have in the film as well. I was also lucky enough to have Sid Haig and some other great character actors to be a part of the film also. I was very fortunate but a lot of that credit goes to Kelly Wagner.

AL: What did you find to be one of the more difficult aspects of the project?
FA: The post side of things I think were for sure the most difficult. Once you get in there and deliver your directors cut there is then a producers cut of the film. We then had to submit it to the MPAA which was something I had never done before. There was quite a lot of cinematic stuff that tripped the film up with the MPAA. We had a lot of back and forth with the people there. We actually had to submit the film over 6 different times to the MPAA. It was very frustrating. To get to the finished project there was a whole series of compromises.

AL: Do you see yourself doing more writing or directing in the future?
FA: I think I will continue to do both. I do however have a project coming up in the fall that I didn’t write. I will just be directing that one. I feel very fortunate to do whatever I can to tell stories. I am not opposed to doing both or one or the other.

AL: Is the horror genre a place where you feel most comfortable?
FA: I have always been a big fan of the horror genre. It has had a huge influence on my art. I am more of a monster fan than a slasher fan. I am very comfortable in the genre and it is one of the places as a director/film maker that you can take more risks. Comedy a 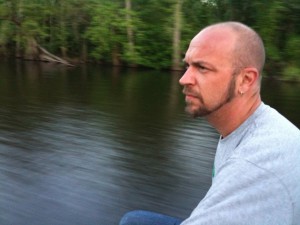 nd horror for me are what I enjoy most. The mind set of those genres are very similar.

AL: What other projects do you have coming up?
FA: I am currently working on an animation piece that is sort of like a dark comedy. That project is in the pilot stage right now. I am also still working as a production designer.

AL: Is there a dream project out there that you want to work on someday?
FA: There is a book titled “A Choir of Ill Children” by Tom Piccirilli that I would love to make into a film. Even though I don’t have the rights to the book yet I think that is a project that is very close to my heart. There is also a script I wrote a few years ago that I would really like to see get made. That script has more of a horror/crime vibe to it.