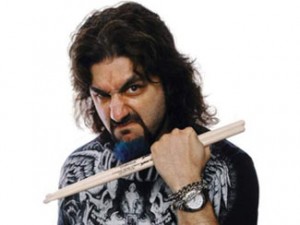 Mike Portnoy is best known as one of the founding members and drummer of the progressive rock group Dream Theater. Portnoy’s latest project Adrenaline Mob which features members of Disturbed and Symphony X is set to release their first full length album on March 13th. Media Mikes had a chance recently to talk with Mike about the group and the upcoming album.

Adam Lawton: How did you first get asked to be a part of Adrenaline Mob?
Mike Portnoy: I have known Russell Allen for many years. Our bands had toured together a couple times and we became very good friends. I have always admired his voice and I think his is one of the best in the business. He is someone that I have always wanted to work with. When my time with Avenged Sevenfold came to a close in 2010 Russell called me up to ask if I would be interested in checking out some material he had been working on with a guy by the name of Mike Orlando. At first I was sort of anticipating material along the lines of Symphony X and Dream Theater. Honestly I wasn’t interested in doing material like that as I wanted to go into some new musical places. I was pleasantly surprised when I hit play and heard the song “Undaunted”. It was exactly what I was looking for and I was instantly on board. It was the right band at the right time. 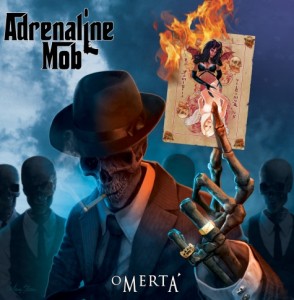 with the project. By the time they asked me to be involved I would say around 80% of the music had been written. I did some shaping and arranging but for the most part everything was there.

AL: How do you think you’re playing on this album differs from that on the Dream Theater and Avenged Sevenfold albums?
MP: I think this stuff is more in line with what I did with Avenged Sevenfold. This was the next natural step in the evolution of that kind of drumming in my life. With Avenged I was out on the Uproar Tour surrounded by bands like Disturbed, Hellyeah and Stone Sour. All these bands are very song oriented and they have a bounce to their grooves. I was very excited playing that kind of music. It’s fun and doesn’t require you to over think anything or play really technical parts. There is nothing wrong with doing that kind of playing but I was looking for a breather. This music definitely is the next step after my drumming on the “Nightmare” album. Having that bounce was the real priority to on “Omerta”. I still wanted it to have my personality and character which I think it does but, have it be restrained somewhat.

AL: Is there a track off the album you are really looking forward to playing live?
MP: At this point we have played everything live already. Every one of these songs comes alive on stage. They are all really energy driven. Songs like “Undaunted” and Psychosane” have a lot drive while the song “All on the Line” serves as a nice breather and a showcase for Russell’s melodic side. When we were playing with Godsmack that song got a great response every night. All the songs serve different purposes depending on what you are looking for.

AL: Where did the idea come from to cover a Duran Duran song?
MP: Mike Orlando and Russell presented that to me at the same time they were showing me all the other material. I had thought it was 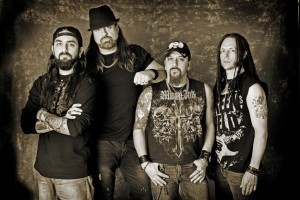 an original because I never heard the Duran Duran version before. I guess that said something for how well it adapted to the rest of the material. I don’t know which guy actually came up with the idea but it surely works with the rest of the material. Lzzy Hale’s vocals on that track are a whole other attraction. It’s amazing hearing her and Russell trading off together.

AL: What do you think will make this album stand out from others in the rock/metal genre?
MP: I think the thing with Adrenalin Mob is we are taking the song writing structure of bands like Disturbed and Godsmack while keeping with the shred factor. Mike Orlando is an incredible player along the lines of Zakk Wylde and Dimebag Darrell. Add my prog background in and you get something very different. Honestly we aren’t trying to break any new ground with the style of this group. We want to write some great tunes with great riffs and melodies. We are not trying to reinvent the wheel. We just wanted to make an album with great songs that are enjoyable to listen to.