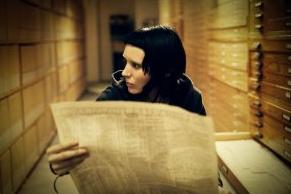 Stieg Larsson’s “The Girl with the Dragon Tattoo” is one of the best novels released in the recent years. The series has spanned two sequels, both which have Swedish films already made. This film is a US remake of the Swedish film based on the novel…get all that. I am sure I don’t have to explain though because of America’s wide awareness of this film. Rooney Mara really does an amazing job taking the role of Lisbeth Salander from Noomi Rapace. Although Noomi’s portrayal just feels a little more rigid and brutal. Daniel Craig just a match up job with his role of Mikael Blomkvist. Very impressive job overall from both. The aspect of this film that I loved the most was easily the cinematography, some shots are just downright breathtaking. You really get Fincher’s vision coming through with the film and it adds a lot to the film itself.

My only issue with the film is that it felt a little too much like the Swedish films. I enjoyed them both equally in fact with this film. I really can’t compare the two because they are so a like. In fact, after viewing this film, I spent a lot of time comparing the two and I was able to pick out bits and pieces of each from each film that I really enjoyed. The score is by Trent Reznor and Atticus Ross (known for the Oscar-winning “The Social Network” score) is so stunning, haunting and really intense. “The Immigrant Song” cover by Trent Reznor and Karen O is truly an instant classic and will be used for many years following. It really drives this film and adds a lot of direction. The film is also 158 minutes but easily feels like it is only 90 minutes.

The only special feature available on the DVD is a commentary with David Fischer. It is a great feature in fact but I assume that the Blu-ray will have tons more features covering the film’s production more in depth. Also as I said that the film’s has such amazing shots, which would also looks much better on Blu-ray than DVD. Overall though this film is worth the purchase easily no matter what format you are able to view it on. I really hope that Fincher is able to make the other two books in the series because I would like to see how his vision is portrayed in them as well.