THANK YOU FOR ENTERING, THE CONTEST HAS ENDED. OUR WINNER HAS BEEN CHOSEN AND NOTIFIED VIA EMAIL. PLEASE CHECK BACK EVERY WEEK FOR NEW GIVEAWAYS! 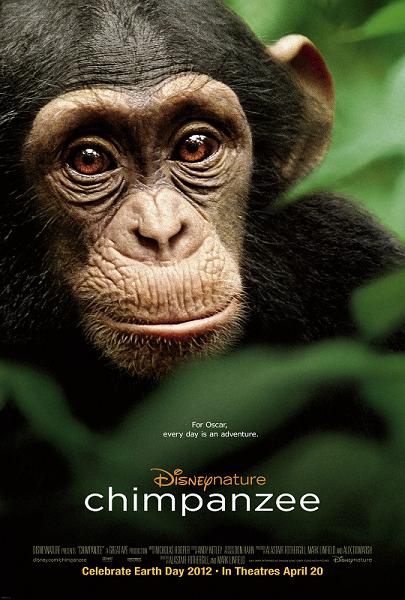 To celebrate the release of Disneynature’s “Chimpanzee”, Media Mikes would like to giveaway One (1) family 4-pack of tickets to the WORLD PREMIERE event at AMC Downtown Disney in Orlando FL on April 13th. If you would like to win this once in a lifetime prize, all you have to do is “LIKE” our Facebook page and then post “Disneynature” and the name of your favorite animal. If you’re already a fan of our Facebook page, just head over and post “Disneynature” and the name of your favorite animal. One (1) person will be randomly selected from all entries to win the family 4-pack of tickets.

This giveaway will be open until Sunday April 8th at Noon, Eastern Time and is only open to residents of the United States, preferably in the Orlando FL area. Only one entry per person, per household; all other entries will be considered invalid. Once the giveaway ends, Media Mikes will randomly pick out winners and alert the winners via email. The winner will need to respond by Monday, April 9th. Good luck and thanks for visiting MediaMikes.com!

WHAT:
The WORLD PREMIERE of the feature film “Chimpanzee,” Disneynature’s newest True-Life Adventure featuring the wildly entertaining and heart-warming story of Oscar, an enchanting young chimpanzee whose life is caught on camera for the world to share. SAVE THE DATE to join directors Alastair Fothergill (“African Cats” and “Earth”) and Mark Linfield (“Earth”), as well as Dr. Jane Goodall for the celebration.

The WORLD PREMIERE of “Chimpanzee” is part of the Disney Kids and Nature Celebration (April 12-14, 2012, at the Walt Disney World Resort), which recognizes, rewards and inspires lifelong conservation leadership. The Celebration features a host of events, including a special Disney Worldwide Conservation Fund Awards Ceremony that honors five organizations for programs that connect kids to nature, and the Friends for Change Youth Summit.

ABOUT THE MOVIE:
Disneynature takes moviegoers deep into the forests of Africa with “Chimpanzee,” a new True-Life Adventure introducing an adorable young chimpanzee named Oscar and his entertaining approach to life in a remarkable story of family bonds and individual triumph. Oscar’s playful curiosity and zest for discovery showcase the intelligence and ingenuity of some of the most extraordinary personalities in the animal kingdom. Working together, Oscar’s chimpanzee family—including his mom, Isha, and the group’s savvy leader, Freddy — navigates the complex territory of the forest.

The world is a playground for little Oscar and his fellow young chimpanzees, who’d rather make mayhem than join their parents for an afternoon nap. But when Oscar’s family is confronted by a rival band of chimpanzees, he is left to fend for himself until a surprising ally steps in and changes his life forever. Directed by Alastair Fothergill (“African Cats” and “Earth”) and Mark Linfield (“Earth”). “Chimpanzee” swings into theaters on April 20, 2012, just in time for Earth Day 2012. “Chimpanzee” is rated G by the MPAA.

See “Chimpanzee” * Save Chimpanzees. See “Chimpanzee” opening week and Disneynature will make a donation to the Jane Goodall Institute to protect chimpanzees today and tomorrow. Visit Disney.com/Chimpanzee for more information.