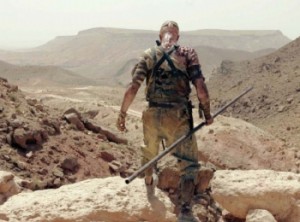 Let’s start with the fact that everyone including Wes Craven himself stated that this film is terrible and doesn’t live up to the original. It has been a few years since I last watched this and I still enjoyed it for the most part, if not just for its campy horror. I am really hit or miss with Craven’s earlier work and I absolutely hate all of his recent work. Craven’s first “Hills Have Eyes is great and definitely a cult classic but I actually prefer the recent remake “The Hills Have Eyes”. This films main fault is the lack of direction and use of multiple flashbacks to the first film, even the dog has a flashback (no, that is not a typo, he really does). This one is not perfect but it is not terrible either, overall campy fun.

This follows a group of bikers who head into the desert to attempt to travel to a a biker race which happens to be close to the events of the first film. Of course they go off the path and try and take a shortcut and they met up with with our cannibalistic desert friends from the first film. It turns out that one of the girls in the group was actually a member of the cannibal family that escaped after the first film. So it turns into a family reunion of sorts. Though things aren’t happy as they bikers start getting hunted by the desert crazies.

Redemption really went to town with the Blu-ray remastered edition. It looks great in HD and includes a newly transferred master restored from original 35mm negative. It is very impressive and even includes its original aspect ratio of 1.85:1. The special features though are MIA and lacking besides a photo gallery and a trailer. I would have loved to seen much more in this area to round up a great release otherwise.