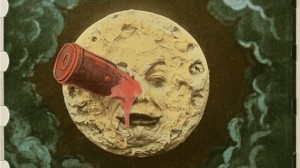 If you think “A Trip to the Moon” seems familiar and can’t put your finger on it, that is because it was featured in Martin Scorsese’s award winning movie, “Hugo”. “Hugo” featured Ben Kingsley playing Georges Méliès, the creator of this 1902 masterpiece “Le Voyage dans La Lune” aka “A Trip to the Moon”.  Thanks to Flicker Alley for releasing this full restored, hand-painted color version to high-def Blu-ray for the first time since it was made 110 years ago.  The Blu-ray comes packaged in a wonderful limited edition, SteelBook case.  It is also being released with its original 1902 colors and a new 2011 documentary called “The Extraordinary Voyage”.

“A Trip to the Moon” was sourced from a once thought lost version of the film and it is also presented with a soundtrack from the French band, AIR.  This restoration looks absolutely fantastic.  The film is only 15 minutes but it is worth watching over and over, I loved watching it in color and also black and white.  The amazing documentary also included on this release, “The Extraordinary Voyage”, runs just over an hour and covers the film’s preservation and history.  It also includes commentary and testimonials from Tom Hanks, Terry Gilliam and Michel Hazanavicus (Oscar winning star 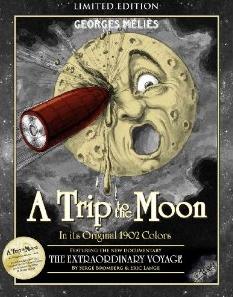 of “The Artist”).  The documentary spends a lot of time going through the restoration project of “A Trip to the Moon” and shows how much work really went into it.  It is really interesting watching them talk about the coloring process for the film and the frame by frame restoration. Let me tell you the Blu-ray presentation looks jut fantastic with its 1080p transfer and the audio is so impressive .

The special features on this limited edition release are extremely impressive.  It also contains the restored black and white version from the original 35mm prints and comes backed with three different audio tracks.  There is an orchestral score by Robert Israel with English narration written by Méliès. The second track is produced by Russell Merritt and includes a troupe of voice actors performed in the U.S. in 1903. The last track features beautiful piano music from Frederick Hodges. There is also a exclusive interview with Nicolas Godin and JB Dunckel from the band AIR.  There is also two bonus films from Méliès “The Eclipse” and “The Astronomer’s Dream”.  Lastly rounding out this amazing release is an beautiful 24-page booklet included in the package.