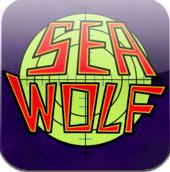 “Sea Wolf” is a remake/reboot of the classic Midway 1976 arcade game. The news isn’t all good though, this update has quite a few problems on the iPhone. The game play is decent but I had a big problem with the controls and the stability of the game itself. The controls are mostly motion-based but I found that it was too restricted and didn’t allow total control. Also when you have to shoot the planes coming at you, you need to use your finger on the screen and end up blocking your shooting view. 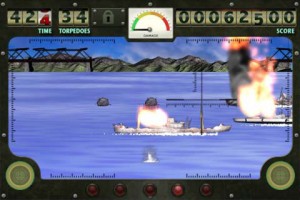 enemy ships with torpedoes and also shoot down enemy planes with your turret guns. Overall the game is definitely easy to just pick and jump right in. It does have a lot of action and levels to play. But the weak color design makes the game feel very repetitive after a short time.

Version 1.2 was recently updated to address bug fixes and stability but I feel that there is still some major bugs hiding away. During game play, I have experienced the game constantly crashing and when you resume playing the graphics are all scrambled. This forces you to have to start a new game and entirely lose your saved state.