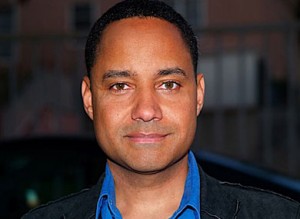 Jeffrey Reddick is known best for creating the successful horror “Final Destination” series.  Jeffrey also was involved writing the 2008’s remake of “Day of the Dead”.  Media Mikes had a chance to chat with Jeffrey about the series and also what else he had planned for 2012.

Mike Gencarelli: You created the very successful horror franchise, “Final Destination”, tell us the origin of how to created it?
Jeffrey Reddick: The idea stemmed from a strange real-life incident. I was on a plane, flying home to Kentucky. I read an article about a woman who was on vacation, in Hawaii, I think. On the morning of her flight, her mother called her and told her not to take the flight she was booked on because she had a bad feeling about it. The woman changed her flight and the plane she was supposed to be on crashed. This story got me thinking…what if she was meant to die in that crash? What if she cheated Death? At the time, I was working at New Line Cinema and was trying to get an agent. I was told to write a spec script for something on TV. “The X-Files” was my favorite show and it was really hot at the time. So, I came up with an episode where Scully’s brother had the premonition. The script got me an agent. Mark Kaufman, a colleague at New Line Cinema, really loved the script and convinced me to try and turn it in to a feature.

MG: Why did you leave “Final Destination” series after the second film?
JR: After the first film, I thought I had a really 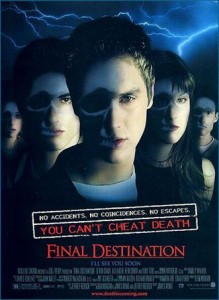 clever way to expand on the original movie, without just rehashing the first one. It’s interesting, I’ve done two of films, James Wong and Glen Morgan did two, as did David Ellis and Eric Bress. But the studio decided to go with completely new folks on the last one. But I didn’t leave the series. Each movie is its own animal and the studio always waits until the last film does theatrically, and on DVD, before deciding if they’re going to make another one. So, it’s really their call. But I’d only want to do another one if I could bring something fresh to the table. Just redoing the formula doesn’t interest me.

MG: After your departure from the series, how do you feel the the series continued through the latest fifth film?
JR: I always remember how fortunate I am to have created a horror film that’s had such a long life, so I’ve found things I’ve enjoyed about all of the films. But when you get to a part 5, sequel fatigue always sets in. The studio doesn’t want to mess with the formula, so the movies tend to blend together and feel repetitive. But each of the films has managed to be a fun ride.

MG: I feel the fifth film did a nice touch are related to the first film, do you think the franchise still has steam left?
JR: I think the fifth sequel was great. I feel they really made that one for the fans and not just to cash in. They brought Tony Todd back and added some real depth, and twists, to the story. I think part 5 is a great way to go out with the current formula. But I think if they want to keep the series vital, they should do a reboot. Death is a crafty mother…and can always come up with a new design.

MG: You took on the task of writing the screenplay to the 2008 remake of “Day of the Dead”, what was you most difficult task? 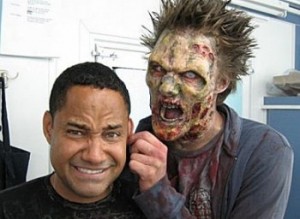 JR: Steve Miner’s involvement was the main reason I signed on. The hardest task was trying to craft a film that was reverent to the original. Because of the rights, we could only use the basic story and characters from “Day of the Dead.” We couldn’t reference any of the other movies, so it had to be a standalone story. But the treatment I wrote, which got me hired for the job, was much closer to the original film. I really feel it paid tribute in a respectful way, while creating a fresh new story. But after I got hired, the studio started making me change things…and strip out everything related to the original. There were many arguments, but at the end of the day they usually win. So, watching the film turn in to something other than what I intended, was the hardest part. At the end of the day, I think it’s a fun film…but it shouldn’t be called Day of The Dead.

MG: Any truth to the rumor of a 3D follow-up to “Day of the Dead”?
JR: They just announced they’re releasing the remake on Blu-ray in 3D. I’m excited to see it.

MG: What do you have planned next in the works?
JR: I’ve got several irons in the fire, but nothing I can report right now, as you never know if, and when, things will pan out. But I can say they’re all genre projects and I’m hoping to direct one of them. I’ll keep you posted.