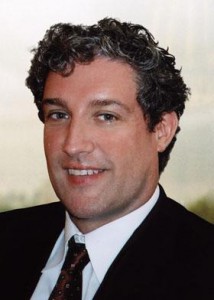 Al Jean is known best for his role of Writer, Executive Producer and Show Runner of “The Simpsons”. The show is currently in its record breaking 23rd season and celebrating its 500th episode on February 19th, 2012. Media Mikes had a chance to chat with Al about his job with “The Simpsons” and what we can expect from it’s future.

Mike Gencarelli: You wear many hats on “The Simpsons”, how do you juggle them all including executive producer and show runner?
Al Jean: I came up as a writer, so the most important thing for me is being head writer. There all these other aspects of it that I feel take away from main job of writing. Not that working on budgets and boards aren’t important but I have just always felt that way.

MG: How do you feel that the show still holds up and is relevant this long after 500 episodes?
AJ: It’s crazy since nothing in television lasts this long. The fact that we still get to do these stories that we think are interesting and relevant is a tribute to the way the show is created. The cast all works really hard.

MG: The 500th episode airs on Feb.19th, tell us about what we can expect from the 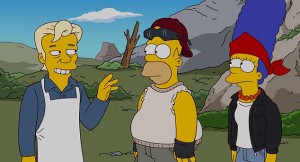 episode and what cameo voices?
AJ: Julian Assange will be voicing himself in a cameo. We have also enlisted another hard to find person for a brief appearance as well. The basic premise of the episode is that the Simpsons find out they are being kicked out of town for the things they have done over the years.

MG: How can you reflect on the recent Guinness World Record breaking Simpsons Ultimate Fan Marathon?
AJ: I was actually there for that. I think they could have gone longer but cooler heads prevailed. I am glad no one went crazy and started shooting people. (Laughs) Of course congratulations to the two men last standing.

MG: What else can we expect from the rest of this season?
AJ: We have guest stars such as Brian Cranston, Steve Carell, Zooey Deschanel, and Lady Gaga set to appear this season. Lady Gaga is actually playing herself while the others are playing characters. We also have a Halloween show based around the Mayan 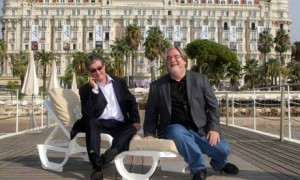 prophecy of 2012. This year is going to be really exciting.

MG: When you started out with this show many years ago, did you ever think you would see this landmark?
AJ: No. If I had said that you would have put me in an institution. I would have been ecstatic if you had said 50 at the beginning. Matt (Groening) thought it was going to be a hit but I don’t think anyone else thought it would reach this point.

MG: How do you think that creating the shows now differs from when you started?
AJ: Things have changed very little. At the beginning there was incredible attention being paid to it but you know that won’t last. It has been replaced by this feeling of acceptance and that it is part of people’s lives. It’s a wonderful thing.

MG: Is there ever any hopes for a sequel to “The Simpsons Movie”? 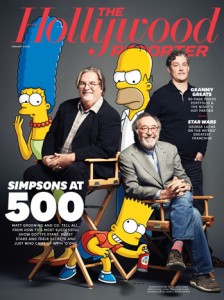 AJ: Yes there is hope. We aren’t working on it now because it is very draining to work on the movie and the television series at the same time. I think we would all be better off if we waited until the show ended before we start another movie…but who knows when that will be.

MG: The show will continue another two seasons until season 25, what do you foresee for the future?
AJ: We are going to episode 559 for sure. It will depend on the economics at that point. We had to decrease our budget to get these extra two seasons. There may be another reduction as television is not as profitable as it once was. I wouldn’t count the show out though.