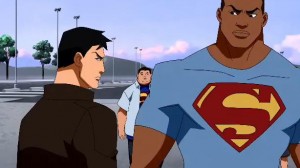 Join Robin, Miss Martian, Superboy, Aqualad and Kid Flash on their adventures to fight the bad guys. This DVD comes packed with four episodes from the first season. This release lands in the series between from episode 9 through 12.  There are 26 episodes in season one so expect at least another 4 volumes for this season. The series is really fun and exciting but these episodes have started to get a little more darker and intense. If you are a fan of shows like “Justice League” and “Teen Titans”, this is a good mix of both.

The episodes includes are “Befret”, “Targets”, “Terror”, “Home Front”. “Befret” deals with the team trying to recover their memories after their mission in Bialya. In “Targets” puts the team in between an assassinate plot against Lex Luthor. “Terror” focuses on Superboy and Miss Martian planning to infiltrate Belle Reve. Lastly, “Home Front” brings 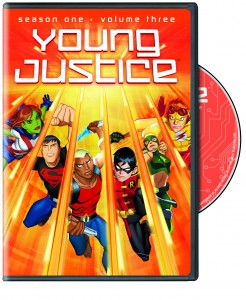 forward the attack from Red Inferno and Red Torpedo on Mount Justice. Definitely some of the best episodes in the series to date.  I will look forward to see what comes next especially with the cliffhanger it leaves off on.

Robin, Aqualad, Kid Flash, Superboy, Miss Martian and Artemis have become YOUNG JUSTICE – The Justice League’s secret weapon against the forces of evil. The teen heroes will take on under-the-radar missions that would be impossible for the Justice League to handle covertly. Red Tornado will be their supervisor; Black Canary will be in charge of their training and Batman will hand out their assignments.