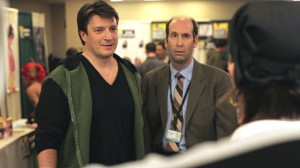 Season 5 is the most ambitious yet for this fantastic web series and this DVD includes all 12 episodes uncut. The scale has been expanded well beyond the past seasons. The plot features the group going on a road trip to attend a video game convention, MegaGame-O-RamaCon. Even though they are at a gaming convention there is little video game playing and more focus is giving to individual characters and their plots. I really enjoyed the direction that this show is going in and with the up-scaled plot makes the show feel well beyond just a web series.

Felicia Day, who again wrote and starred in this season, mentioned that this season was her dream route to take the show to a new level. I think that the writing is much better and the performances from the cast are so sharp this season. There is also many more cameos this season including Maurissa Tancharoen Whedon, Doug Jones, Nathan Fillion, Erin Gray, Brent Spiner and of course Wil Wheaton. Like I mentioned each character has it own stories, Codex (Day) focuses on saving their game from being sold to a corporation.  Vork (Lewis) and Bladezz (Caso) decide to get a booth and take advantage of the Cheesybeard Pirate fame. Clara (Torsen) joins up with a Steampunk group. Tink (Okuda) get a real back story involving her family. Last but not least, Zaboo (Parikh) starts a seat-saving clan during convention. Each story was really sharp and was fine-tuned to each actor skills perfectly.

The special features are excellent as always for this series. Since this show is available online, these extras are the main draw. There are a bunch of cast interviews, talking about their experience with this season. The music is cheesy but the interviews are good. There is three featurettes included, the first is called “Double Trouble”, which tells about Leslie Crystal road from extra to co-star. The next is called “How to Build a Con” and really shows how much work goes into this show. The last is called “Steampunk Verite” and tells about the Steampunk booth was created. Like past DVD releases there are also two audio commentaries, one with the cast and one with creator Felicia Day, director Sean Becker and producer Kim Evey. Both are great and a lot of fun. There is a four minute gag reel, which is a riot. Lastly there is a video of the first episodes table read, which is cool to see but is shot from a terrible angle. Overall, another impressive DVD release! Look forward to season 6!