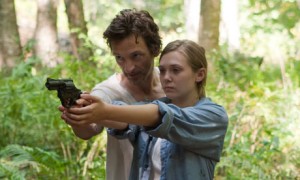 “Martha Marcy May Marlene” is the powerful and at times disturbing debut feature for both director Sean Durkin and star Elizabeth Olsen that is now available to own.

Olsen plays the eponymous Martha who, having just escaped a cult commune isolated in the Catskills, takes shelter in the Connecticut lake house of her sister (Sarah Paulson) and brother-in-law (Hugh Dancy) whom she hasn’t seen in over two years. Martha struggles to fit back into her sister’s upper middle-class world and Durkin cuts seamlessly between her life at the lakehouse and flashbacks to the cult’s farm. The pacing of the flashbacks is incredibly effective and helps to build the rising tension that Martha feels as she clashes with resuming normal life.

At the forefront of the flashbacks is cult leader Patrick, played by an equal parts seductive and sinister John Hawkes. At first an appealing father figure to Martha, he evolves into a rapist (though his followers would disagree) and worse. The most fascinating aspect of Martha’s escape is perhaps how believably conflicted she still feels about leaving. It is evident Martha’s relationship with her sister is not a warm one and so we can only conclude that it was some immovable survival instinct, rather than an act of rebellion, that would finally send Martha from the the cult. For all the abuse, Martha still yearns to share a bed with Patrick. In some of Olsen’s most powerful scenes she quotes his indoctrinations verbatim at her relatives with a steely chilling confidence that tells us she’s not out of the woods yet.

Durkin doesn’t offer a clear resolution to Martha’s story, but that’s fitting for a character who is so deeply damaged. As it is, this is a fascinating character study that warrants revisiting on Blu-ray.

The main special feature on this Blu-ray include ‘Mary Last Seen’, the short that Durkin wrote and directed prior to the full feature. It introduced the world of the film while also working as a standalone story. Fortunately it didn’t have to stand alone and now it makes for an eerie precursor ‘Martha’. In addition to the short, the Blu-ray offers insightful featurettes on the making of the film, including the filmmakers’ views on cults, and John Hawke’s hauntingly beautiful full rendition of Jackson C. Frank’s “Marcy’s Song”.