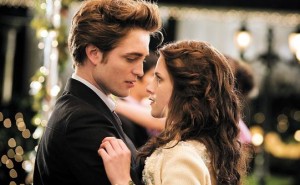 “The Twilight Saga: Breaking Dawn – Part 1” is the second to last film in the series.  Some people will be rejoiced to have it end and some will be mortified when it is over.  This film is honestly hard to get through, but luckily the last 15 minutes are very cool.  I have a feeling that “Breaking Dawn – Part 2” might be pretty bad ass, now that all the romance is done.  I think that they could have kept “Breaking Dawn” as one movie but I am sure it is mostly for the fans..and to make more money.  This Blu-ray release is going to be a hit for Valentine’s Day, since it is getting released perfectly in time for its fans to enjoy Bella & Edward’s wedding and honeymoon during the holiday.  Die-hard fans will obviously eat up the romance but the casual fans might want to wait till “Part 2” comes around.

If you follow “The Twilight Saga”, this is the movie that you are really waiting for the marriage of Bella and Edward and of course Bella possibly turning into a vampire.  Basically the whole film is just one long honeymoon scene followed by Bella’s pregnancy.  The birth of their child might not be as simple as it sounds as it will break the treaty with the werewolves. The Cullen’s with the help of Jacob will need to protect Bella from the werewolf pack.  But will Bella even survive this supernatural pregnancy? But of course if you read the book you know the answer to this. Also be sure to stick around through the credits to see a sneak peak in the Volturi’s role for “Part 2”.

The Blu-ray presentation is fantastic overall with its video which looks sharp especially during the battle scene at the end. The sound is honestly the best part though of the film boasting its superb 7.1 DTS-HD Master Audio track, very impressive.  The bonus features are packed and will definitely satisfy the most hard core fans.  Firstly you are able to jump immediately to your favorite scenes.  There is the Bella and Edward’s Wedding Video, which is for major fans only.  There is a great audio commentary with director Bill Condon, he really seems to be an actor’s directory and really enjoys the filming experience.  There is a super in depth 6-part “Making Of” series which takes you individually into every aspect of the film from each character to the film’s production.  It is very interesting even for non-fans.