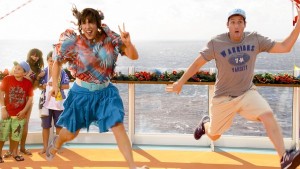 Man oh man…Adam Sandler, what are you doing?  After watching “Grown Ups” in 2010, I finally believed that Adam Sandler’s films had officially bottomed-out and couldn’t get any worse.  HAHA, well guess what…they did.  This film is just plain sad and fails on almost every level.  It doesn’t take a genius to figure out that this was a bad idea…come on Adam! So while taking it into consideration that I am not a fan of watching Adam Sandler recently, so to only add insult to injury we get Adam Sandler times two and in drag in this film. It is sad to say when the best part of the film is seriously a quick cameo from Johnny Depp wearing a Justin Bieber shirt.

Since I already tore apart Adam Sandler, I will chat about the rest of the film now and don’t get me wrong, I actually really want to enjoy Adam Sandler’s films again but pieces of crap like this make it impossible. Many sources have said that Al Pacino is the saving grace for this film but I really didn’t feel the same way. He definitely played a fun more obnoxious version of himself but the jokes really weren’t nailed. I did like his Dunachino rap at the end. Katie Holmes was miscast in this film and can do so much better…come on Katie!! Don’t even get me started on when the family goes on a Royal Caribbean cruise, they might as well have been flashing the phone number on the screen to make a reservation.

The Blu-ray presentation is impressive though with its clear HD video transfer and Sony’s sharp DTS-HD MA 5.1 track. This release also included a streaming digital copy for the new Ultraviolet service. The special features are ok but unless you totally love this film, they are worth passing up. If the film wasn’t hard enough to watch there are almost 20 minutes of deleted scenes. I am sure glad they were cut because the movie couldn’t have been a single minute longer. “Laughing is Contagious” is a blooper reel, decent overall. “Look Who Stopped By” is a feature on all the cameos in the film, which was basically the only good part of the film. “Boys Will Be Girls” is a short features on Sandler’s transition from Jack to Jill. “Stomach Ache” is a walk around the set with Regis Philbin. Since the film was a walking advertisement, a commercial for the cruise is only expected with “Don’t Call it a Boat-Royal Caribbean”. End of line.  Try again Adam Sandler.