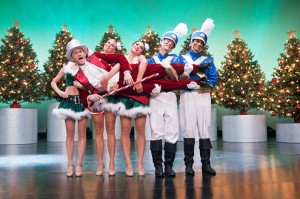 Traveling back to 2004 with “Harold & Kumar Go to White Castle”, who knew that today we would have a third film about these guys. Not to mention a Christmas movie…not to mention again that it would be in 3D. I think that this film is easily the best installment in the series. The Blu-ray video looks so fantastic and vibrant with the color especially the claymation scene. The sound is another issue if you are watching the theatrical cut either 3D or 2D it is amazing. The extended cut is missing the amazing DTS-HD Master Audio 5.1 for a decent but lacking Dolby Digital track. Let’s talk about the 3D Blu-ray as it seriously makes the whole movie. The 3D adds so much to the film and really allows the film to additionally laugh at itself within the third dimension. You can still watch this film in 2D, but it does loose some of the fun factor and over-the-top cheese that this film delivers.

If you are looking to watch the extended cut in 3D, look again as it is only available in 2D. That is a little disappointing, but the extended cut is really nothing special. There are some gross gags added to the cut but the film works well without it. Next up, I am a HUGE fan of the UltraViolet Digital Copy and I recommend everyone to start using this great service. Other special features includes a bunch of EPK shorts hosted by Thomas Lennon called “Through the Haze with Tom Lennon”. They are hilarious and definitely worth checking out as Lennon was a great asset to the film. There is a look 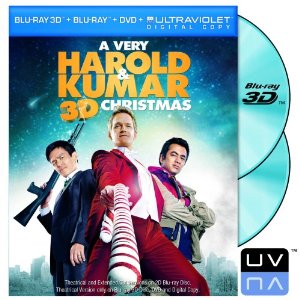 into the claymation sequence and includes picture-in-picture with its animated storyboard reel and the final scene. Lastly there are about four minutes of deleted scenes…funny but not hilarious.

When Kumar accidentally burns down Harold’s father-in-law’s prized tree on Christmas Eve, the two embark on another ill-advised journey to New York City to replace it.

Buy It 2/7 on Blu-ray™ Combo Pack with UltraViolet Digital Copy or Download to Own http://bit.ly/DHKVS