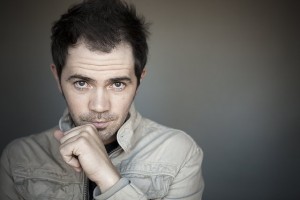 Josh Hammond is an actor with a resume of around 35 films. Josh is probably best known for his role as Jake Spencer in the horror film “Jeepers Creepers II”. Josh has a new film coming out titled “Agua Caliente” which also features Jason Mewes and WWE Veteran Al Snow. Media Mikes had a chance to speak with Josh about the film and some of his upcoming projects.

Adam Lawton: What can you tell us about the film “Agua Caliente”?
Josh Hammond: “Agua Caliente” is a comedy about 4 misfit film makers who receive $100,000 to make a film. However instead of using it for the film they blow all their money on one night of debauchery and are left with the task of shooting a film in 48hrs. We decide to shoot a horror film at a Halloween birthday party. We end up delivering the film but that’s all I am going to say. (Laughs)

AL: Can you tell us about your character in the film?
JH: I play a guy by the name of Lake Palmer. He is an out of work C-list actor working in construction. One of my friends in the film gets this money from my Uncle played by Al Snow to make a film. The film will hopefully make it so I don’t have to work in construction my whole life. I am pretty much a deadbeat alcoholic. (Laughs) he is sort of the zero to hero type guy.

AL: How did you get involved with the project?
JH: I had done a film a few years ago with Bill McAdams Jr. and Jessica Sonneborn. We had stayed in contact over the years and one holiday weekend we all went out to Palm Springs. The 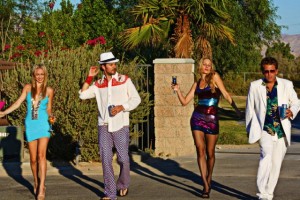 house we went to is actually the house we used in about 90% of the film. Bill brought up the idea of making a movie and we just started bouncing ideas back and forth while we were sitting in the pool. Over the next couple months we kept going out there and writing more and more around the location. Next thing I know we had a finished script and we started looking for money. We called in favors from friends and had some crew member friends come in to help us out.

AL: Had you worked with your wife (Kristina Page) on screen prior to this film? And how was the experience?
JH: I had actually never worked with her before this. We had been attached to a film together but we shot our scenes on different days. When you are producing, starring and writing it can be a little stressful. When you finally do go home I pretty much didn’t want to look at her even though I love her. (Laughs) It is hard to work together on that many levels and then go home and have to cook and clean.

AL: How was it working with Jason Mewes?
JH: Jason was very fun to work with. I have actually worked with him twice before. We worked together on “The Tripper” and “Noah’s Ark”. It was fun to be his boss and be able to tell him what to do. (Laughs) Jason is very creative and a lot of fun. Jason’s mind is so far out there that you have to be going his speed in order to keep up. It was exciting to have him attached to the project. It was a pleasure working with him.

AL: What are the release plans for the film?
JH: We have just submitted it to the Palm Springs Film Festival. I think the decisions are going to be made on that in the coming weeks. We are really hoping to get in there because we shot the film in the Palm Springs area and my wife grew up around there as well. There is also one or two other festivals we are looking to get in to. At the same time we are shopping for distributors. 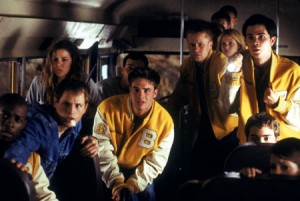 There are a lot of options out there to get the film out.

AL: What other upcoming projects do you have in the works?
JH: I have one film in the can titled “The Penny Dreadful Picture Show”. That film was done by Imaginarium and Dreadful Pictures. We shot that in Connecticut with Lee Scott directing. The film is 3 short films combined to make the picture show. I play the lead in the middle film titled “Slaughter House”. The story is based around a Charles Manson type family. I am slated to do a film in January titled “American Girls” where I play a serial rapist. In March I am supposed to start on a film called “Gallows Road” with Kevin Sorbo. I am also in the process of writing a Christmas film with Bill and my wife. I have a lot of things on my plate and am very happy.

One Reply to “Interview with Josh Hammond”