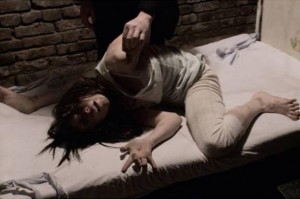 In the wake of successful series like “Paranormal Activity”, “The Devil Inside” is the latest film to try and recreate its glory. The film immediately received bad press from its viewers complaining about how bad this movie was. I went into his film expecting the worse and was really pleasantly surprised. This film contains follows the same path as the other films but delivers some scares and some great “oh shit” moments. If you can get over the shaky camera, I would recommend this.

The film follows a young girl, Isabella, who wants to find out the truth about her mother, Maria Rossi. In 1989, she was arrested for killing three people during a supposed exorcism on herself. She is moved to a hospital in Italy for “undisclosed reason” and Isabella wants to get to the bottom of her condition. She hires a filmmaker to film her on her journey to Italy to learn more about exorcisms and her mothers situation. After meeting with her mother, she finds that she is involved with more than she can handle and the devil is definitely real.

The film is starts off with a documentary feel but then switches to the “Paranormal” feel just following Isabella on her journey through Italy. There are some really cool scenes during a few exorcisms and some good jumps. If you are not a fan of “Paranormal Activity” films, then clearly you need to stay away from this. If you enjoy these type of films then this will leave you satisfied. Due to the success of this film, we should be seeing more in this series. So like it or not, expect more exorcisms.