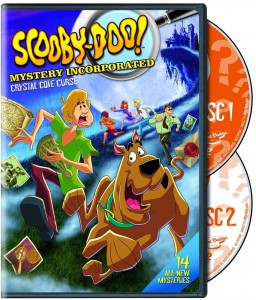 Finally WB’s listens to its fans and gives us more episodes. The last “Scooby Doo” DVD release only included 4 episodes, this one includes a packed 14 episodes spread over two discs and completes the first season of this great series revival. Of course these episodes include great notable voice work from Patrick Warburton as Sheriff Bronson Stone, Gary Cole as Mayor Fredrick Jones Sr., Vivica A. Fox as Angel Dynamite, Udo Kier as Professor Pericles and Linda Cardellini, who played Velma in the two live action theatrical films, as Hot Dog Water. I mean I could go on for paragraphs listing the amazing talent in this series. Overall fans of old “Scooby Doo” give this a shot and it is definitely a no-brainer for kids.

The remaining episodes in season one continues to follow the mystery of The Crystal Cove Curse. They even go into Fred and Velma getting married, which is really cool to see that dynamic in the series. During their mysteries, they have come across secrets about the original Mystery Incorporated group. They need to solve their mystery fast before they face the same fate. These episodes also make great homage and reference to the following: H.P. Lovecraft., Jonah Hex, Jonny Quest and Vincent Price. They also include great cameos from Hanna-Barbara characters like Jabberjaw and The Flintstones.  All-in-all great episodes to close a great season! Can’t wait to see what they have in store for season two.

The adventures of a talking dog and his four human pals as they try to unravel the strange and haunted history of their hometown. The tone is comedic, but it will never lose the edge that our heroes are in some frightening situations. The stakes are real. Now you can see the second 14 episodes of Season 1 together in this set.