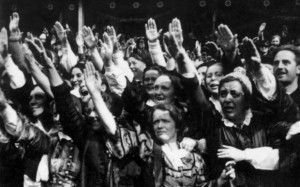 Firstly, I am a sucker for History Channel programs…especially ones that are in 3D. Like said in the opening scene of the show, most of the photos and video from WWII have already been seen over the years. This show though provided new moments of WWII that has been hidden and buried until now. The coolest part about this is that they were captured in 3D with stereographs.

The man behind these 3D photos taken for the Nazi’s back during the war was Heinrich Hoffmann, the German photographer. This amazing collection includes Allied reconnaissance photos and images that documents the rise and fall of the Third Reich. The photos look absolutely amazing in 3D and its amazing that they have held up so well over these years. It is also interesting to be able to analysis the third dimension on some of these images.

If you thought that was enough this program also features an 3D film shot by the Nazis in 1943. The footage is a rare look behind the scenes into the Nazi during the war.  Overall, the video on the Blu-ray is presented perfectly and the sound is really sharp. My only complaint on this release is that I hoped that this could have been longer.  Maybe The History Channel & A&E will plan on releasing more 3D products in the near future.