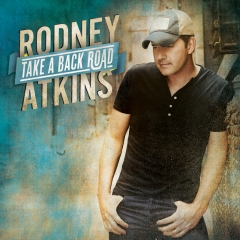 RODNEY ATKINS RELEASES “TAKE A BACK ROAD” TODAY, TUESDAY, OCT. 4
Fourth Studio Album Featuring Sixth Career No. 1  Single “Take A Back Road” Available on iTunes and in Stores Nationwide
Nashville, Tenn. (Tuesday, October 4, 2011) — Curb Records’ platinum-selling hit-maker Rodney Atkins has proven sometimes taking the back road pays off. After celebrating a two-week No. 1–his sixth U.S. No. 1 and second No. 1 in Canada– with “Take A Back Road,” Atkins reached the fourth largest audience at country radio since 2005 according to Nielsen. Not to mention, single sales have rung in over 600,000 at the pace of close to 40,000 per week. Today, Tuesday, October 4, Atkins releases the new album TAKE A BACK ROAD, which features additional stand-out tracks including “Cabin In The Woods,” “He’s Mine” and more, available now on iTunes and in stores nationwide. The new music video, directed by Andy Tennant, can be viewed HERE and on CMT, GAC, TCN, and more.
Teaming up once again with producer Ted Hewitt, who co-produced both the platinum “If You’re Going Through Hell,” and “It’s America,” Atkins worked hard to capture the unconventional vision he had in mind for this new release. Atkins spent hours in his home studio crafting each vocal and track–paying attention to every minor detail. It’s a process he cherishes almost as much as being onstage, and one he takes extremely seriously.
“What does it mean to follow your own path? I try to think about that a lot when I’m making an album,” Atkins explains. “To me, it’s going somewhere you’ve never been, because when you do that, you wind up seeing things that no one has seen before… which means you can paint the picture differently.”
The songs on TAKE A BACK ROAD tell the stories of the every-day middle American — from the sweetly honest battling couple who’ve drawn lines down the middle of the bed in “Feet,” to the fiercely parental pride-even-through-the-tough-times in “He’s Mine,” the tunes are chock full of the authentic emotion Atkins strives for in each and every note.
TAKE A BACK ROAD Track Listing
Produced by Ted Hewitt and Rodney Atkins
1.)    “Take A Back Road” (Rhett Akins, Luke Laird)
2.)    “He’s Mine” (Casey Beathard, Phil O’Donnell, Tim James
3.)    “Family” (Jim Collings, George Teren)
4.)    “The Corner” (Dale Dodson, Dean Dillon, Jessie Jo   Dillon)
5.)    “She’s A Girl Ain’t She” (Tony Martin, Neil Thrasher, Wendell Mobley)
6.)    “She’d Rather Fight” (Tom Martin, Tom Shapiro, David Lee Murphy)
7.)    “Feet” (Tony Haselden, Walker Hayes)
8.)    “Cabin In The Woods” (David Lee Murphy, Jim Collins)
9.)    “Just Wanna Rock N Roll” (Rodney Clawson, Chris Tompkins)
10.)   “Growing Up Like That” (Rodney Aktins, Ted Hewitt, Ben Hayslip)
11.)   “Tips” (Rodney Atkins, Ted Hewitt, Bob Regan)
12.)   “Lifelines” (Rodney Atkins, Ted Hewitt, Ben Hayslip)
In celebration of today’s debut, Atkins is spending time in the place where all roads in America lead, Chicago’s Wrigley Field.  He’ll chat with press, throw some pitches with the Chicago Cubs players and even mow the field with a Massey Ferguson tractor. A small-town boy from Greenville, Tenn., Atkins has always been a huge baseball fan and avid supporter of the Cubs; and spending time outside with his 10-year-old son Elijah preparing him for his all-star games is one of his favorite past times.
Moreover, on Oct. 12, Great American Country (GAC) will give fans the chance to get an in insider’s view on Atkins’ career and the stories behind the new songs on TAKE A BACK ROAD with Origins: Rodney Atkins which premieres at 10 p.m. ET with a re-air at 2 a.m. ET.
Atkins is currently out on tour with Darius Rucker, performing for fans in arenas across the country. For a full list of dates, visit www.rodneyatkins.com.