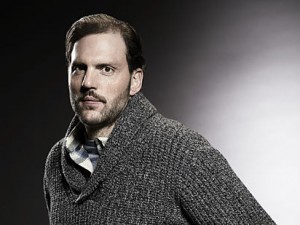 Silas Weir Mitchell is playing Monroe in the new show “Grimm” on NBC. His character is similar to the “big bad wolf” from the Grimm world. Media Mikes had a chance to chat with Silas about his role and what we can expect from season one.

Mike Gencarelli: How did you get involved with the show “Grimm” playing Monroe?
Silas Weir Mitchell: I had previously worked with Jim Kouf who is one of the creators of the show. He and I had hit it off and we have a great working relationship. They called me in and it was a good fit.

MG: What has been your greatest challenge playing the role?
SWM: The best part for me has been the inner conflict that the character has. He is a reformed criminal and I have to fight against my criminal urges. My character is really trying hard not morph as he is all done with those things.

MG: What has it been like working with the CG and make-up effects?
SWM:  I haven’t had to wear the prosthetics that much. It takes so long to get everything on that they have come up with a way to use both CG and make-up. They have a system that works really well. A lot of the time I just have markers glued to face for the computers to read.

MG: How has it been working with David Giuntoli?
SWM: We have had a great time working together. We are very lucky here as we have fun and everyone gets along. David is perfectly cast for this role. He has charm and a sort of haunting quality which is perfect for his character of Nick. Our relationship in the story is very unique and almost like a chess match. David and I really enjoy that.

MG: What can we expect from the first season?
SWM: In the first few episodes, the writers are definitely hitting the fairy tales that we know. The writers are changing them though. They are using the original stories as a foundation. The episodes are sort of jumping off points as opposed to a re-telling. There is a mythological quality to what is going on without using the humanity.

MG: How does this show compare to your other work?
SWM: It’s different for me as I have been in on this show from the start. I came in on the ground floor. Every other series I have worked on I have come in later in the process. When I did “Prison Break”, I originally was only supposed to do a couple episodes but it worked out to where I was around for awhile. I didn’t come in knowing I was going to be in every episode. With “Grimm” it’s been great knowing that I have steady work. There is also just so much to chew on as the character is very rich.