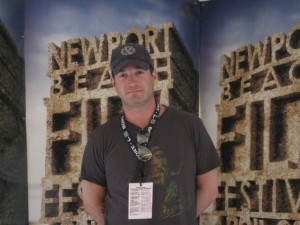 Scott Rosenbaum is the writing and director of the new film “The Perfect Age of Rock ‘n’ Roll”. The music road trip film and stars Kevin Zegers, Jason Ritter and legend Peter Fonda.  Media Mikes had a chance to chat with Scott about working on his first film and also what he has planned next.

Mike Gencarelli: Tell us about when was “The Perfect Age of Rock ‘n’ Roll” was shot and about its road to release?
Scott Rosenbaum: We shot in the summer in 2008 and finished post production in spring of 2009. So it has been a little over two years ago that we finished. It is interesting because people see that and it is not necessarily count as a strike against the film but they become suspect. I find that strange. It is my first feature film and independent film work is so challenging right now because everything has dried up. It was challenging in the first place to get the film made but then once we finished it, it was right around the beginning of the economic crisis and it made everything more difficult to get it released, especially for a first time filmmaker. We persevered and did what we had to do to finally get it out.

MG: What did you like most about working on “The Perfect Age of Rock ‘n’ Roll”?
SR: It was really a labor of love for me. I grew up in Long Island and playing in bands since I was 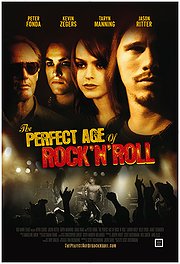 12 years old. So I have a love of music and the history of music. I have always been involved and around filmmaking but I didn’t go to school for that. I went to school for journalism. I finally committed to complete a screenplay and to just go for it. The whole process is gratifying just being able to shoot the film and get that kind of a cast to come out and work with me on my first feature. Also to be able to put all that music in the film that I grew up loving and wanted to be apart of this film to tell the story. The whole process was really fantastic for me.

MG: Tell us about the working with Kevin Zegers and Jason Ritter and legend Peter Fonda?
SR: Each of them brought some much to their character and to the creative process. The directing background that I have is from New York based theater. One of the consistent themes that I focused on was experimentation. All of these actors were so giving and into their roles. They each elevated the writing to a better place. Fonda, of course, is a Hollywood legend and it is clear that “Easy Rider” is a big influence on the film and probably every road trip film. He was very generous with the “Easy Rider” legacy” and letting us toy with it and utilize it within our film. As far as Kevin and Jason, I cannot say enough about those guys. It is hard enough to act as a musician, that was definitely a challenge from casting. They pulled it off beautifully. Kevin sang all of his own vocals and Jason was a musician already. Most of the songs were done by Steve Conte who is the lead guitarist for the New York Dolls. Jason was able to follow the notes, strumming patterns and makes it look great. Those guys definitely nailed it.

MG: How do you feel that this film relates or differs from other music films?
SR: There has been a lot of criticism and it is a little frustrating for me. Some critics are saying it is a knock off of “Almost Famous” and it is like they didn’t even watch the film. I do not think that is the case at all. Anytime you make a rock and roll film, there is a set path you need to walk. What I 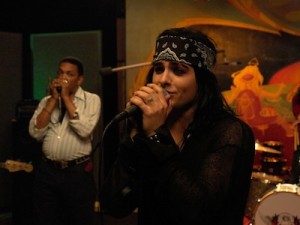 think is different about this film is that it is focused on the evolution of them music and the relationships within the music business. I think we struck out on our own and laid some new trials that I do not think have ever been touched on. I wanted to make a really gritty real feeling film for what it feels like to be on the road and in a band. I hope that comes through.

MG: Who are some of your favorite artists and where they influential in the movie?
SR: That is another one of the things I wanted to portray in this film that I do not feel is touched on at all in a narrative feature is the evolution of rock and roll from the blues. There has always been talk about how the rockers stole the blues from the blues men. It is interesting but no one has really picked up on it yet but I tried to make this film very layered with a deep story. Things like putting the blues music behind the flashback Spyder scenes.  All of those blues songs were chosen because they were either done by bands like Led Zepplin, The Allman Brothers and Eric Clapton. All songs that were made famous by rock band that are household names but were from blues artists, who were more or less obscure. I tried to layer the narrative between Eric and Spyder in that way by portraying all the great blues music I grew up loving thinking it was initially The Rolling Stones or Led Zepplin or The Doors when it was actually Muddy Waters or Willie Nixon and other great blues artists. That is definitely one way that this film sets itself apart. I came to the blues the way that many from the white audience came and that is through rock and roll. Blues are really one of the great art forms given to us along with rock and jazz.

MG: Was the concert footage more difficult for you to shoot then the rest of the film?
SR: Yes for sure, it was something I was very conscious of. There was some definite reference that I wanted to go over with my cinematographer before we shot. One thing to note, I was very fortunate to work with Tom Richmond and I believe it was his 40th feature film. He also did everything from Pearl Jam’s “Jeremy” video to many of the 90’s Foo Fighters videos. We went 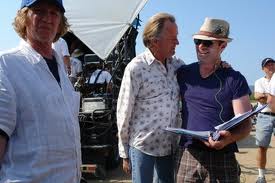 through a lot things I wanted to evoke in those music scenes. The small roadhouse bar has one particular feel to it. The big concert scene was very much influenced from 90’s rock band like Guns ‘n Roses, Nine Inch Nails and Marilyn Manson. I think we did a very good job capturing the essence of what those moments would have looked and felt like.

MG: What do you have planned next?
SR: Good question, well in that blues bar scene, all of those musicians are veteran blues men from Delta and Chicago. They are a dying breed and I look at them as a natural treasure. They are just the most beautiful guys you will ever meet. We set out while we were in post to make a documentary about these blues men and the rock stars I just mentioned. We had a concert in LA and had band members from Jefferson Starship, The Doors and Dave Matthews Band. Our plan is once we get the balance of the financing is to put on another concert and bring out the real heavy hitters of blues rock to highlight the fact that they blues-men represent the legacy of American root music which in turn become rock and roll. My goal is to make a modern day version of “The Last Waltz”. Then I am also writing my follow up script which will be my second feature film as well.