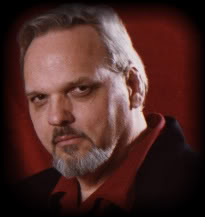 Bill Johnson played the charismatic and almost loveable Bubba in Tobe Hooper’s “Texas Chainsaw Massacre 2”. Bill took time out of his busy schedule to talk with Movie Mikes about his work in the film as well as some of his other upcoming projects.

Adam Lawton: Can you tell us how you got involved with “Texas Chainsaw Massacre 2”?
Bill Johnson: Early summer of 1986, I got a call from my agent telling me that I was going to go and audition for Tobe Hooper. I had not seen the original “Texas Chainsaw Massacre” prior to that phone call however I saw it immediately afterwards. I went into the audition and read for the casting director. From there I got a call back to read with the casting director and the writer this time. Then I got another call back, this time to read with Tobe and Caroline Williams. It was mostly improvisational and they liked Caroline and I together…so they cast me.

AL: Can you tell us what it was like working with Bill Mosley and Dennis Hopper?
BJ: Dennis was a pretty amazing guy. He was doing pre-production for his film “Colors” at the same time as filming for “Texas Chainsaw Massacre 2” was going on. Dennis would only be on set the days he was shooting. Dennis really had this enormous energy and when you were with him you really got that sense about him. Dennis had a great sense of humor and was always joking around. Working with Bill was also a lot of fun and he was really ready to play that role. He and I played cards quite a bit while I was cooped up in my trailer in full costume. (Laughs)

AL: Any great behind the scene stories you can tell us from that shoot?
BJ: The place we were shooting in one night almost burnt down, which was pretty interesting. We were shooting on the set of the underground building and for that set the design department had 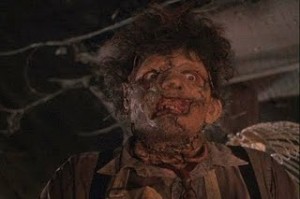 searched all the second hand and goodwill stores within a 50 mile radius for any lamps they could find.  After they got them all put up in there they actually clocked the temperature at 125 degrees. The idea for all the lights came because production had fallen behind and they lit the entire building to save time on set up. The University of Texas art department did the props and art work which was really great. From what I was told some of the wiring may not have been up to code and a spark or something set off the fire. Someone from the crew threw a ladder up and pulled down the stuff that had caught on fire. They really saved the bacon.

AL: Can you tell us about your role in the film “Jon”?
BJ: “Jon” is a film about a fledgling serial killer. Billy Instone produced, wrote and directed that film on a budget of just $5,000. I think he ended up with a really nice film! The main character has an imaginary friend  to speak that convinces Jon to do harmful things. I have four scenes in the film and play the role of a priest who Jon visits with to talk about the things he has done. The film has a really great ending that I think people are going to enjoy. Billy is just such a great artist and the director of cinematography Dave Griffin did a really great job as well on the film. I hope to have some of the DVD’s at a few of my upcoming convention appearances for people to check out.

AL: You also have done some voice work for a few video games. Can you tell us how you got involved with that?
BJ: I have a degree in performance and have done a lot of stage and screen work and voice over has been a part of that. I got a call one day from a guy by the name of Raymond Benson, who I had gone to school with. He tells me they are going to try something that has never been done before with

computer role playing games in that they are going to use digitized voice. I went in the first day to record and it was pretty much a janitors closet with some foam walls and a dat recorder which I guess had been smuggled in from Germany.(Laughs) We recorded everything for that first project in that closet. I find doing the voice over work to be a lot of fun.

AL: Can you tell us about your upcoming project?
BJ: I have a role in a film called “Boneboys”. Kim Henkel who has been the co-writer on most of the “Texas Chainsaw” movies wrote this script and it is wicked! I play this really bad perverted baker that tries to lure in teens. There is some really cool stuff in this film and I think people are going to like it. The film is wacky and very intense. It’s quite edgy.  I have a cameo role in a film called “Supernatural Exorcism” which was directed by Derek Lee Nixon, who is also in “Boneboys”.  A few more that I have been a part of recently one being “Naked Horror” by Carlo Rodriguez another titled “Creatures from Hell” and I also did an old fashion comedy called “Camp Kickatoo”.