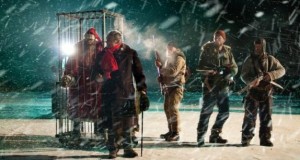 There is definitely something about this film that makes it stick. I have had numerous viewings of this film and it definitely gets better with each viewing. Christmas is my favorite holiday and I love holiday films but this is not your snuggley feel good film. Since it is considered a horror film though, it is almost virtually bloodless. I would have like to see more carnage but overall I was left relatively satisfied. I have a feeling that it is going to be ranked up there as a cult classic. along with “Black Christmas” and “Gremlins”. The film has a very large scale feel to it though doesn’t try to go overboard. The Blu-ray presentation is fantastic and really clear and the sound is also very impressive.

The story follows a young boy who believe that the Santa Claus is coming to town…literally, but he is not the happy giving St. Nick we know and love.  During an American-lead dig on Korvatunturi mountain, which sits right outside the village, the secret of Santa Claus might have been discovered.  With Christmas right around the corner it is up the boy to save the children of the village from being put on the naughty list.

The film is packed with great bonus features.  The original two short films “Rare Exports Inc.” (2003) and “Rare Exports – The Official Safety Instructions” (2005) are included, which inspired this movie.  “The Making of Rare Exports: A Christmas Tale” is definitely worth since the behind the scenes is very interesting. “Blood in the snow” is a  look at the concept art from the film.  My favorite feature is definitely the comparison for the animatics & computer effects since the film does have quite a bit of visual effects.  Also included is a photo gallery featuing behind the scenes production shots. Lastly there is the original theatrical trailer from Finland, which made me want to see this film to begin with and is far better than the American trailer.

SYNOPSIS:
It’s the eve of Christmas in northern Finland, and an ‘archeological’ dig has

just unearthed the real Santa Claus. But this particular Santa isn’t the one you want coming to town. When the local children begin mysteriously disappearing, young Pietari and his father Rauno, a reindeer hunter by trade, capture the mythological being and attempt to sell Santa to the misguided leader of the multinational corporation sponsoring the dig. Santa’s elves, however, will stop at nothing to free their fearless leader from captivity. What ensues is a wildly humorous nightmare – a fantastically bizarre polemic on modern day morality.

RARE EXPORTS: A CHRISTMAS TALE is a re-imagining of the most classic of all childhood fantasies, and is a darkly comic gem soon to be required perennial holiday viewing.