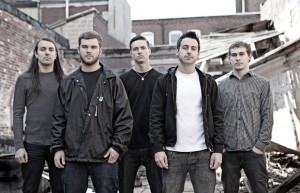 Texas in July released their second full length album this spring titled “One Reality” Media Mikes got a chance to chat with the whole band recently and it was quite entertaining to say the least. A huge thank you goes out to the band as well as their manager Jimmie and publicist Natalie for making this happen.

Adam Lawton: How did you guys get involved with the iMatter festival?
Christian Royer: 3 years ago they asked us to do it.
Ben Witkowski: A few years ago we got the offer and I think that was the year Devil Wears Prada played as well as Kid Napkin.
CR: We were really stoked to be asked!
BW: Shout out to Kid Napkin! Their bass player is wicked good!

AL: What has been your take on playing the festival?
Adam Gray: It’s great!
BW: It’s cool and I love playing it!
Alex Good: The kids are all really great and nice!
CR: They always treat us really great. They love us and we love them.
BW: The crowd has been really great each year we have played.

AL: Chris I would like to say you look a little bit like Russell Brand.
BW: OOOOOOOOOOHHHHHHH!!!!
AG: (Laughs)
CR: The interviews over!
Chris Davis: I am leaving now! (Laughs)

AL: What can you tell us about your recent release “One Reality”?
BW: We put a lot of hard work into it and we are really proud of it!
Alex: It’s our second full length album but our first on Equal Vision.

AL: Does anyone have a favorite track off the album?
CD: The title track “One Reality” which we just started playing for our upcoming tour with We Came as Romans.
CR: I think I am with you as that song has been really fun playing live.
BW: It’s a toss-up between when I listen to the album and when I go out and play the album. It could really be any of the songs.

AL: Do you guys have any crazy tour moments you can tell us about? 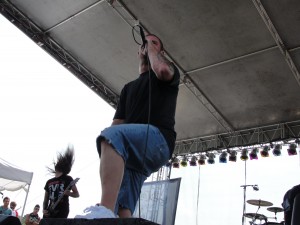 AG: I was held up at knife point!
BW: We blew a tire in the Bronx one time and were stuck there until 4am.
AG: The trailer got stranded there for a few days but it never got robbed.
CD: We ran out of gas in Montana one time in a blizzard. We ended up pulling over at a gas station and waited out front until they opened at like 6am. I was driving. I’m an idiot!
CR: Europe was pretty crazy just in general.

AL: How is it for you guys touring overseas as compared to in the states?
CD: I think its better.
AG: There just tends to be double the kids each night coming out to the shows.
CR: It’s great because none of us have to drive over there or worry about being up. They treat all the bands like gods.
BW: I love Las Vegas!
CD: What? (Laughs)
BW: I was just teasing. (Laughs)

AL: Can you tell us about your upcoming fall tour?
BW: We are very excited for that. We are playing with our good friends We Came as Romans and we hear good things about Miss May I and the rest of the guys on the tour.
CD: The full line up is We Came as Romans, Texas in July, and Miss May I, Of Mice and Men and Close to Home.
BW: It’s going to be a great time and the tour wraps up at the Tuxedo Junction in Danbury, CT with Miss May I.
CD: We get one day off then we have to fly to Europe.

AL: Adam can you tell us about your appearance on the “Late Show with Jay Leno”?
AG: Probably the most stressful thing I have ever experienced in my life. It was awesome to meet everyone but I was just so nervous and stressed out that I couldn’t clear my head. I did enjoy it though.

AL: How did you get involved with doing the show?
AG: There was a video of me that had gone viral going around. Hayley Williams from Paramore kind of helped it and really started it off by posting it on her Tumblr site. From there Ryan Seacrest posted it in Twitter to Travis Barker and from there it just blew up.

AL: Jay treated you alright?
AG: Yeah! He walked in dressed in all denim and told me not to be nervous as my grandma was watching. That’s all I needed.

AL: You had to be in front of William Shatner as well correct?
AG: Yeah but him I don’t care about!
BW: William Shatner better watch his back!
AG: I am really not a big fan of his.

AL: I assume he wasn’t very pleasant?
AG: Yeah but It doesn’t really matter. I didn’t exactly know who he was at first and I know that’s kind of stupid but I never was a real “Star Trek” fan. As soon as I got back from that thing I laid down, turned on the television and the first thing I see is William Shatner on the Priceline commercial.

AL: Other than the fall tour what else do you guys have planned?
BW: Were starting to write some new rock songs!
CD: We have pretty much all of November and December off. So we will probably start writing for the new album. We have some touring at the beginning of the year planned as well,which should be good.
AG: That tour will be a good one! But we can’t tell you who is going to be with us.