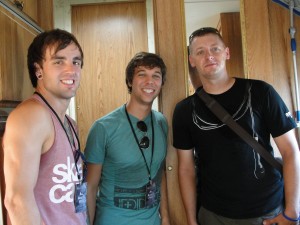 Media Mikes had a chance recently to talk with JB Brubaker and Dustin Davidson from the band August Burns Red about all the great stuff the band has going on this fall and next year.

Adam Lawton: How did you guys get involved with the iMatter festival?
JB Brubaker: We played the festival for the first time last year. I’m not sure how everything actually worked out.  We were contacted about playing the show last year and being it isn’t too far from our home in Pennsylvania., so we loaded up the trailer and came up to play. They asked if we would be willing to play again this year and we were happy to come and do it.  We had such a great time the previous year and the festival is for a good cause.

AL: You guys were on Warped Tour this summer and then had a few weeks off. What do you have planned next tour wise?
Dustin Davidson: We are off until the middle of October. We head over to Japan for a festival and then from there we go to Germany and do a full European tour with A Day to Remember.

AL: How does tour overseas compare to touring here in the states?
JB: The U.S. is much more comfortable. The buses you get in Europe are somewhat smaller than here and they pack you in pretty tight.
DD: There are usually two bands per bus.
JB: The buses are almost always double-decker buses which makes the ceilings pretty low which makes it so you can’t stand up all the way. The buses aren’t great over there but it does beat sleeping in a van.

AL: Can you tell us about the bands most recent release titled “Leveler”?
JB: The album came out on June 21st and it’s our fourth full length record on Solid State. You could call it our most ambitious release to date. While we are still a metal band we have started to include other styles of music a little bit. We have sort of branched out of the metal core box more so than we have in the past. I think that has been a result of us being bolder as well as getting better at our instruments. We wanted to explore some other sounds besides the thrash riffs and break downs. We still love those but sometimes its fun to do other stuff as well.
DD: Adding new things makes it so we aren’t making the same record every time. 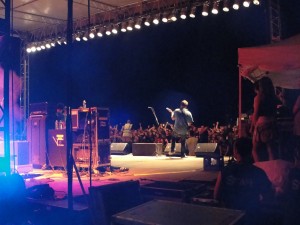 up listened to them. I would be there singing every song!
JB: I would say the Arcade Fire. They are an awesome band that isn’t in our world of music at all. It would be pretty crazy if we did get to play with them. I think they are awesome and they are a great live band.

AL: Any great road moments you can share with us?
JB: There have been so many. The one that sticks out most recently was from this summer’s Warp Tour. We were in Pomona, California all the bands were hanging out waiting for bus call and our sound guy runs up to the bus to tell us there are two people really going at it behind the trailer. A bunch of us go out to look and sure enough about three buses down there is a guy and girl just going at it. It was pretty wild and I guess something you would expect. We generally don’t see that type of stuff on tour!
DD: We never see that stuff happening!

AL: Other than the European tour is there anything else you guys have going on?
JB: I am currently writing for a release that I can’t say too much about. But I can say that it’s going to be a specialty release that won’t be out until probably next year. We also are in the works of putting together a North American headlining tour that will start in January.