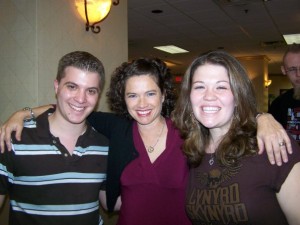 Heather Langenkamp is known best for her role of Nancy in “A Nightmare on Elm Street” series.  Heather recently took a film crew along with her on various convention trips and filmed the documentary “I Am Nancy”.  The doc shows Heather’s perspective of meeting fans and how she holds up in the “Nightmare” series.  Media Mikes had a chance to chat with Heather about the working on “Nightmare on Elm Street”, her documentary “I Am Nancy” and also what she has planned upcoming.

Mike Gencarelli: Over the last 25 years how do you feel the character of Nancy stands out in the horror genre?
Heather Langenkamp: It didn’t really hit me until sometime after I had finished the other movies. Nancy stands out for several reasons since she grows up over the course of 15 years in the films. When we first meet her she’s your average teenager and by the time we see her in “New Nightmare”, she is a mom, married and had this incredible life. Not too many characters in film get to show the growing up of a character like that.

MG: Working on the documentary “I am Nancy” what would you say was the most challenging aspect?
HL: Definitely waking up and not knowing what to expect every day. We would gather the crew and then go to these conventions and we never knew if what we shot was good. I was often busy at my table greeting fans but I would tell the crew to go out and just talk to fans. I really had no idea what was being put down until months later when we transferred everything to computer and watched it. I was amazed at all the different things the fans said about what the character of Nancy meant to them.

MG: What would you like to tell your fans about the film and the Nancy character?
HL: I want people to have fun when they go to movies. You spend a lot of money to go and have them kind of take you away from your daily life for a bit and enjoy a piece of art which I think “A Nightmare on Elm Street” is. Our culture is something we all have in common and I love how people from all walks of life can sit and talk about films be it “Harry Potter” or “A Nightmare on Elm Street”. I know people in the movie business that get into it for that reason to make people laugh or cry. What I have noticed since I made the documentary is that there are a few movies out there that people watch over and over. Some of those movies mean something special to those people and for some “A Nightmare on Elm Street” is one of those movies and I am really proud that it has those lasting qualities.

MG: How much footage did you guys have to go through?
HL: I imagine it was over 100 hours as we had gone to 6 different conventions and we had either one or two cameras shooting. The conventions were around 30 hours each and then when you add in Wes Craven’s interview we probably had about 150 hour or so. My director Arlene Marechal has this amazing gift of remembering people and their dialogue from the shooting.  After watching the footage dozens of times she organized all of her editing all from memory. It was pretty unusual and took her quite a bit of time. We would be saying we needed a certain story and she would be able to remember a person from all the footage who told that story. She had this incredible photographic memory. One thing I love about the film is that it is really fast paced and we tried to include as many people as we could. There was a lot of interesting things said but we just couldn’t fit them all in. 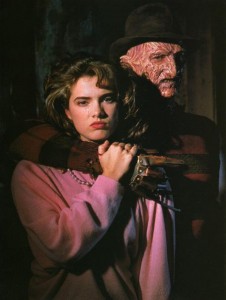 MG: How did you meet Arlene and get her involved with the project?
HL: Funny enough, she is my sister in law. We were working together at our make-up effects shop for a film called “The Cabin in the Woods” and I needed some help. You can always trust your family and I called her up and told her I was in need of some extra hands managing the office. Arlene came down and worked kind of as the plant manager for about 4 months. During this time Arlene brought to my attention that a lot of the guys who work at the shop would talk about me and or be nervous when I would walk by and stuff and that they wanted my autograph on their Freddy glove. I told her that happens all the time. (Laughs) She was like did you know they were such big fans and that they love you? I was like ya, ya, ya, whatever I’m with people all the time who are big fans of the film. When we were done with that show Arlene said she wanted to make a film about me going to all these conventions and that it would be very interesting. She felt Nancy should be just as big as Freddy and that there were a lot of Nancy fans out there. I said sure as I was going to be at 6 conventions that year and Arlene came with me to each one and that’s where everything came from.

MG: What has been your fondest memory from working on the documentary?
HL: Meeting fans like Jude who you meet at the end of the film really made the show. She was just amazing and she made me cry. Being able to just talk to people and I remember every fan. They gave me such great gifts with their stories.

MG: Do you think you will ever get to play Nancy again?
HL: All I can say to that is in my dreams. I would love to do that! I would be an older grey haired Nancy for sure but I feel like there is another story there. The great thing about Freddy is that he lives in your dreams. He can transform and things but he never ages and he can always be there. I have always thought there is another opportunity for a Nancy/Freddy battle. The relationship between the two characters is really interesting and Robert England always made sure to show that Nancy was getting to him and his most difficult fight. Nancy always had to have a fighting chance. He does get me in the third film but in the final film I win and in the first film I kind of win so in my mind its 2- Nancy and 1- Freddy.

MG: Can you give us some back ground on “The Cabin in the Woods” 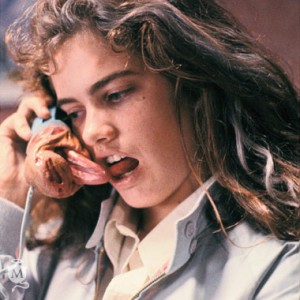 HL: We were really fortunate to get that project and it was much bigger than we anticipated. We thought it would just be some make-up and a few creatures but it turned into what we called the “Costco of Death” (Laughs) there was so much stuff and it was super challenging. Drew Goddard and Joss Whedon or so imaginative it’s almost like a burden to be around them as they have so many ideas. We were constantly sending them drawings and ideas. It wasn’t a big budget movie so we were on a tight time table. I am praying the film comes out in April on the big screen as I have yet to see a cut of it. Its super secret! I am hoping people will get really excited about horror films again after this film as it really shakes things up.

MG: Can you tell us about your latest film “The Butterfly Room”?
HL: I am really hoping that comes out soon as it’s been in post-production for over a year now. It was financed by the Italian government as they love horror films much more than the Americans do believe it or not. I go to play the daughter of Barbara Steele who is a classic 60’s and70’s horror actress icon. She and I have this bizarre relationship in the movie. I have to save this girls life that has been drawn in by my mother. The role is very Nacy-ish. I can’t vouch for if the movie is going to be great or not but I really loved my part and acting with Barbara Steele was a thrill.