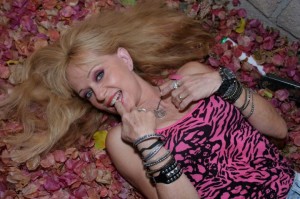 Linnea Quigley is known best for her scream queen roles in films like Trash from “The Return of the Living Dead” and “Hollywood Chainsaw Hookers”. She is the topic of focus in the new documentary “Screaming in High Heels: The Rise & Fall of the Scream Queen Era” along with Michelle Bauer and Brinke Stevens. Media Mikes had a chance to chat 80’s horror with Linnea and chatted about the dozen projects she has still yet to come.

Mike Gencarelli: Tell us how “Screaming in High Heels: The Rise & Fall of the Scream Queen Era” came about?
Linnea Quigley: It was amazing. I got a call and asked about being in the documentary. They flew me out to Los Angeles. It was Michelle (Bauer), Brinke (Stevens) and I. And I haven’t seen Michelle in forever. It was really great seeing everybody. I really liked Jason. I wasn’t sure it was going to be as big as it has been. It was on Chiller TV. I went to the premiere screening in Chicago. It is just a greatdocumentary. It gives so much information but in a few way.

MG: [laughs] Great. Better obviously than being called pimple face. I was really shy in my school years.
LQ: To be called, it was just amazing. It was just the ultimate honor to hear that. It is something you never think of but always wish for it. A lot of women say it’s degrading but if it happened to them, I am sure they wouldn’t say that [laughs].

MG: Trash from “The Return of the Living Dead” has to be one of the best characters in the genre, can you reflect looking back on the role?
LQ: Oh man, I loved being in that role. I was into the punk rock thing and I was in a band. My character is not like who I am personally, so it was fun to play her. When you are that age, you don’t think anything is every going to happen to you and talk about death. It was fun to play that sort of character.

MG: How long did the make-up take once you turned zombie?
LQ: With all the painting of me and everything, I would say a good six hours. I have had some longer ones as well. The hard part was trying to get that white off afterwards because it had to be waterproof. You can imagine going home at 6am in the morning and nothing gets this off. The producer had me sit in his really nice Jaguar and there is still makeup he still can’t get off this leather seat [laughs]

MG: 1988, brought some of your most unique titles films “Hollywood Chainsaw Hookers” and “Sorority Babes in the Slimeball Bowl-O-Rama”, why do you feel these films are still loved by the fans?
LQ: For some reason, there are just some films that make an impact. They just had all the write qualities. They just came together with the right music and cast. You could’nt ever redo these films. It was just a special time. It was just the type of movie that never gets old.

MG: I always loved the idea of your “Linnea Quigley’s Horror Workout”, how did that comes about?
LQ: We were on the set of “Murder Weapon” and Ken Hall and I just started talking about what a good workout it is to do a horror film. I had to swing this axe over and over again. We just started brainstorming and decided to do it. We got the financing and just did it. We are actually doing to be doing a commentary soon and re-released it on DVD. We have a lot of funny stories just from the two days it took to get it done.

MG: How do you feel about “Silent Night, Deadly Night” getting remade?
LQ: Oh I didn’t know it! I thought it was remade a bunch of times already lol. The second one is like the first one [laughs]. It is news to me though. I hate to say it but they are going to have to come up with something pretty good because that film has been stretched out thin.

MG: How do you feel that the horror genre changed over the years, especially with all the recent remakes?
LQ: The only remake that I have liked is “Piranha 3D”. The “Scream” and “Saw” franchises are all more for the gore factor then a real plot. The first ones are ok but then they just get very unrealistic. There is a huge difference between the “Sleepaway Camp” series and then the “Saw” series.

MG: Did you ever get to keep an our your outfits or props from your films?
LQ: Well, when I first started I never thought there was a need to keep things. I have somethings from “Return of the Living Dead”. I was promised my outfit from “Night of the Demons”, but never came through with it. A lot of the movies I’ve done, we had to supply our own wardrobe so I do have those things. I have an ensemble of clothes to wear. I have the top from The “Horror Workout” still and the G-String from “Hollywood Chainsaw Hookers”. It is kind of funny.

MG: Tell us what you have planned upcoming?
LQ: Yep, “Celluoid Bloodbath: More Prevues from Hell”comes out October 9th. They show trailers and I do little intros. That is really fun to watch to you like the older horror. “Cougar Cult” just got into Redbox. So I got to Redbox everyday and go “Oh…have you think this film” [laughs]. “Caesar and Otto’s Deadly Christmas” is coming out this Fall, it is really fun. Brinke and I are both in it and there are a bunch of great cameos, like Felissa Rose. Also I am suppose to do this movie called “The Trouble with Barry” later this month. I also just did this film where I have three age changes and a monster costume and that is called “Disciples”, which I also co-produced with Joe Hollow. I just did “Demonica”, which your gonna love this…it’s demons on skates. I did a short “Stella Buio”, which is getting really good reviews and going to the festivals. I also did a video for this band Sexcrement that Victor Bonacore directed, it is just so wild. On top of all that I’ve been doing some conventions. So it has been really amazing.