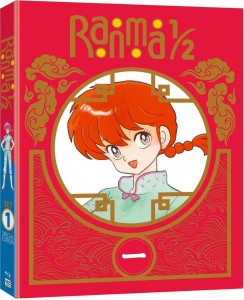 Ranma ½ started off as an manga series back in 1987 in Japan, which was turned into a TV series shortly after in 1989. This is way before Japanese anime hit the US. The series got big here probably around the early 90’s and this and “Dragon Ball Z” were two of my favorite anime series growing up. Ranma ½ ius definitely unique and is an interesting blend of romance, comedy, action and marital arts. Thanks Viz Media this series is getting presented in high definition for the first time ever. Set 1 includes the first 23 episodes of the show, so since there are over 140 episodes total I would expect at least an additional six releases over the next year. If you are a fan of this series, then this is a new brainer.

Official Synopsis: From the legendary oeuvre of master creator Rumiko Takahashi, the mixed-up, madcap, martial arts romantic comedy Ranma ½ returns! After taking a surprise dip in a cursed spring while on a training journey in China, martial artist Ranma Saotome and his father, Genma, aren’t quite themselves anymore. Now Ranma turns into a girl whenever he’s splashed with cold water, and Genma turns into a panda. Their new forms cause nothing but confusion at the Tendo dojo, where Soun Tendo is waiting to introduce one of his three daughters to Ranma… as his fiancée. Turns out Genma and Soun arranged the match long ago, but the girl, Akane, and the boy, Ranma, aren’t exactly crazy about the idea, or each other! Or are they? Watch the gender switching, jealous rages, and martial arts battles unfold all over again!

Having watching this show on bootleg VHS tapes growing up, these 1080p transfers are stunning with high quality encodes created using the original Japanese Blu-ray masters. Fans are able to enjoy each episode with an  uncropped, 4:3 aspect ratio. Another first time for this release is that all episodes are arranged in the original Japanese episode order. There are both lossless tracks available for the original Japanese (with English subtitles) and the English dub, and a secondary subtitle track is available for signs and songs. The box presentation also for this set is amazing coming in a premium chipboard box with gold foil stamping with art illustrated by Rumiko Takahashi. Inside it also includes a 64-page booklet with a full color episode guide and a manga re-master sampler.

If you were satisfied with all that, wait there is still more in this Limited Edition box set. There are some decent extras including an exclusive “We Love Ranma: Part 1” Manga Re-Mastering Interview with VIZ Media editor Hope Donovan, which talks about the processes behind the latest manga release. There is two great extras taken from 2013 New York Comic Con this past year with “Ranma ½ Panel Footage” and “VIZ Media Events Highlight Reel”. Lastly there are upcoming episode previews and trailers included here. Can’t wait for Set 2! Keep them coming Viz!