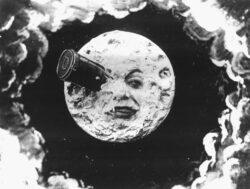 Since the early days of film making, the audience at the cinema have happily engaged in a suspension of disbelief and partook in the grand illusion of movies. The magical aspect of film making is getting the viewer to believe – to accept the storyline, the characters, the mis en scene, the location, and anything else they may see on the silver screen. Believe all this even though none may be true. The pioneers of cinema such as George Méliès in his 1902 French film ‘A Trip to the Moon’ (Le Voyage Dans la Lun) employed a number of cinematic technique and special effects to show a rocket blasting off into space. Since the industry was brand new, Méliès used many tricks of his own invention or learning such as disappearances that occur in substitution splices, smoke pyrotechnics, and transitional dissolves. Anyone familiar with Buster Keaton’s comedies know the artful use of these jump cut tricks to achieve a certain reaction. This was the silent era, where the film making focus was primarily visual. At times, a piano accompaniment would play in the cinema, yet the only dialogue or description was that of the readable black screen text shots during the film. Without sound and a voice, the silent film actor usually had to convey their expressions differently on screen and this if often why silent acting can seem effusive and theatrical. The always entertaining Charlie Chaplin, for instance, became famous for his ability to convey emotions with a multitude of facial features and movements on screen to evoke laughter or sympathy in the viewer.

The advent of sound at first terrified many in the film industry, especially actors who now had to use their voice and learn dialogue. In the classic film Singing in the Rain the character who plays a former silent film actress has such an awful, high-pitched voice that it needs to be dubbed over. Dubbing the voices or music in film went through a tipsy training wheel’s process whereby often synchronization issues led to sometimes comical situations (such as when the man had the woman’s voice or vice versa). Moments like these broke the veil of illusion or magic of cinema as the viewer would then be made aware that what they were watching was indeed a film full of mechanical or camera tricks. Unless the director wanted to achieve a certain message, as reflected with the oeuvre of Godard or Truffaut or with actors breaking the 3rd wall by looking at the camera, the inner workings must always be kept hidden. There is the famous scene in the Wizard of Oz where the powerful wizard demands “Pay no attention to the man behind the curtain.” This essentially is a terrific metaphor for film making.

Another famous moment in the Wizard of Oz is when Dorothy steps out for the first time in the land of Oz and the world has magically turned to colour. Colour is another pivotal benchmark in the film industry as this led to greater realism and a deeper effect of the illusion. Before viewers were well aware that what they watched was a film, but now the world on screen reflected their own with colour and sound. Film buffs often love watching behind the scenes specials, playing trivia games, and also online games related to movies. For example, there are many online casino sites where film fanatics can discover slot games specific to movies. Online slots such as Elk Studios ‘Bloopers’ and ‘Platooners’ both show the process of film making while players spin 5 reels, 3 to 4 rows, and a set number of paylines. These slots are engaging, easy to learn, and offer many features and bonuses for the chance to win rewards. They also are great as casino slots, so an actor can even spin while getting their makeup done. Other movie themed titles include ‘Book of Oz’, Halloween’, and ‘Jurassic World.’

Speaking of Hollywood blockbusters like Jurassic Park, the introduction of colour also saw the rise of Studio era film making where set backgrounds and effects could magically shoot a Sahara Desert sandstorm in Egypt in the morning and a snowstorm in the Arctic circle after a lunch break. The magic of the Studio lot allowed for movies to be filmed anywhere in the world and at any time. From the 1950s onward, cartoons and in particular Disney grew to massive a success. Yet until now there has always been a clear identification between what is a piece of animation and what is filmed in real life. In the past couple decades, however, leaps and bounds have been made with animation that coincides with the digital age. Skilled animators use CGI technology to further heighten the movie making magic and create virtually lifelike animations that blend with real world shots or backgrounds. For instance, creating a believable looking dragon or even characters that walk and talk like live actors, yet are complete animations. Most viewers may not even recognize what is real and what is not.

There is a paradox in cinematic animation when a CGI creation is so real that it crosses a line over to the ‘uncanny’, which has a tendency to turn off and even creep out audience. This was the case with the 2011 movie ‘The Adventures of TinTin’ that received uncertainty among critics who were distracted by the slight indicators that the characters were not human, even though the animation was so good they appeared to be living. Lifelike dolls have this same tendency, which is why they are often featured in horror films. With animation so good, it further raises the question of whether resurrecting deceased movie stars crosses an ethical line. For instance, ‘Star Wars: Rogue One’ used animation mixed with an actor to create Princess Leia that resembled the recently passed actress Carrie Fischer and Grand Moff Tarkin played by late actor Peter Cushing. This relatively new area in film making remains a grey area with divided opinions. The key to maintaining the magic, however, is to keep the audience guessing and most importantly entertained.